Alassane Plea gave the hosts Mönchengladbach the lead in the 10th minute but Robert Lewandowski equalized in the 42nd. 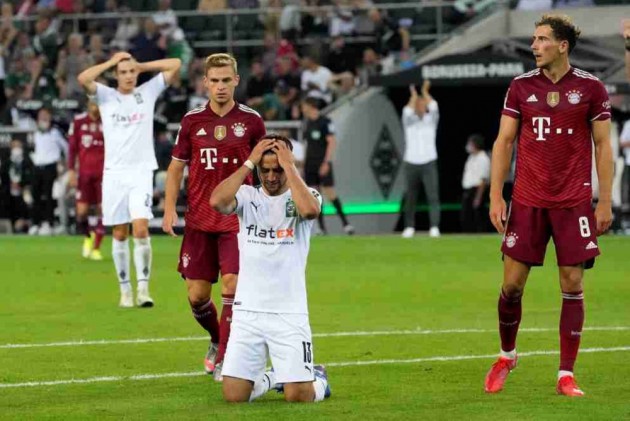 Bayern Munich opened the Bundesliga season with a 1-1 draw at Borussia Mönchengladbach, with the hosts incensed at the referee for denying them a late penalty. (More Football News)

Dayot Upamecano twice looked like he conceded a penalty in the late stages of his Bayern debut, but referee Marco Fritz waved play on and received no contradiction from the video referee despite clear contact from the French defender on compatriot Markus Thuram on both occasions.

Gladbach coach Adi Hutter was booked for his protests in his first league game in charge of the home team. Counterpart Julian Nagelsmann was making his debut as Bayern coach.

Alassane Plea gave the hosts the lead in the 10th minute but Robert Lewandowski equalized in the 42nd.

Hütter's call to start American teenager Joe Scally on the left of defense for his Bundesliga debut paid off as the 18-year-old again impressed following his fine performance in the German Cup last weekend.

Some 23,000 supporters were allowed at the game under new regulations that permit up to 25,000 or half capacity, whichever is greater. Few fans were allowed at any games last season due to the risk of coronavirus infections.

Gladbach's Patrick Herrmann flashed a good chance just wide early on and the hosts missed an even better opportunity shortly afterward, when Herrmann opted to pass to Lars Stindl instead of shooting. Bayern's disorganized defense cleared the danger.

Serge Gnabry missed when he only had the goalkeeper to beat, but otherwise it was all Gladbach and Stindl set up Plea for the opener.

Goalkeeper Yann Sommer denied Lewandowski an immediate response, then again a short time later when Bayern's bench was poised to celebrate. Josip Stanisic was next to test the Gladbach keeper.

Stanisic, who usually plays for Bayern's reserves, was making just his second league appearance due to Benjamin Pavard's ankle injury.

But the equalizer came from a familiar source. Lewandowski got ahead of his marker to volley in Joshua Kimmich's corner before the break.

Sommer made more saves in the second half but Gladbach came closer to a late winner. (AP)