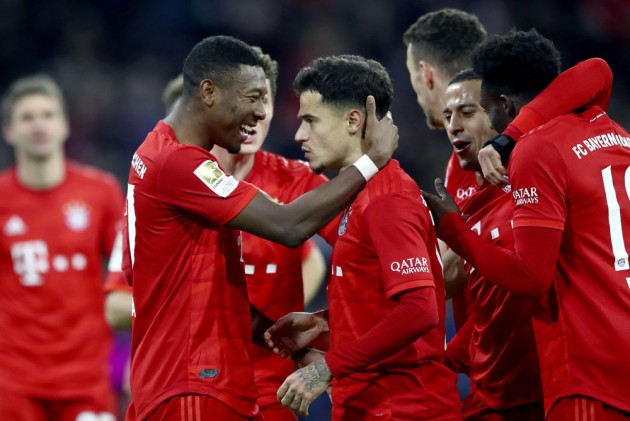 Bayern Munich have paid tribute to the "outstanding" Philippe Coutinho as the Brazil international returns to Barcelona. (More Football News)

The 28-year-old joined on a season-long loan last August, with that deal extended to cover the final weeks of the season after the disruption caused by the coronavirus pandemic.

Coutinho's time in Germany was hugely successful in terms of silverware, with Bayern winning the treble of Bundesliga, DFB-Pokal and Champions League titles for the second time in their history.

Coutinho even came off the bench to score twice and assist another goal in the 8-2 quarter-final destruction of his parent club.

However, injury problems and the form of Bayern's other attacking players under Hansi Flick restricted Coutinho to just 15 starts in the Bundesliga and five in Europe.

"We would like to thank Philippe Coutinho very much. With his creativity and excellent technique, he has invigorated our game during this treble-winning season," Bayern CEO Karl-Heinz Rummenigge said in a statement.

He added that Coutinho's impact against Barca "proved that it was a good decision to sign him on loan. We all wish Philippe the best for his career going forward".

Sporting director Hasan Salihamidzic said: "Unfortunately, he could not be used more often due to injuries and an operation, but he can be rightly proud of his contribution to the treble, especially in the Champions League finals tournament in Lisbon.

"Even though FC Bayern and Philippe Coutinho are parting ways after just one season, his commitment in Munich has made it clear what an outstanding player he is."

Coutinho has been linked with a return to the Premier League, with Arsenal and Chelsea said to hold an interest in the ex-Liverpool player.

However, he could stay at Barca for 2020-21 should new head coach Ronald Koeman consider him important to his plans.