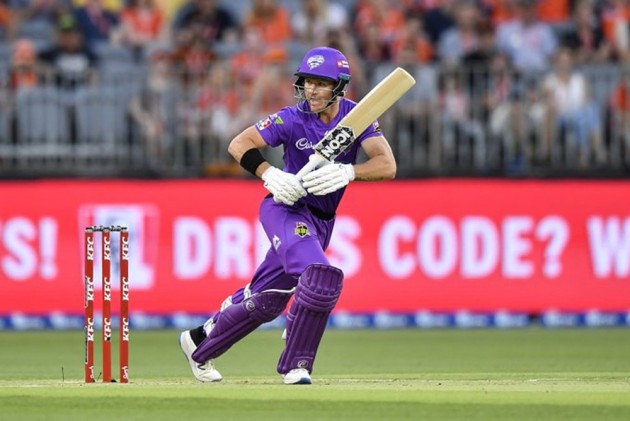 Hurricanes opener Short made the most of a number of reprieves to register an unbeaten 70-ball 103 that included three fours and seven maximums, taking his tally for the season to 248.

Despite the Australia international's efforts, the Scorchers still looked capable of chasing down the 181 they needed for victory against Hobart (180-2).

A 75-run partnership between Mitchell Marsh (48) and Cameron Green (33) gave them hope, but Perth (172-8) lost momentum when the former holed out to midwicket off Thomas Rogers and they were consigned to a fourth loss of the season.

There were plenty of moments when it looked like Short, the leading run scorer in the previous two editions of the BBL, would not get to triple figures.

The opener was dropped on 21 and 68 when Tim David twice showed a lack of judgement in the field, while Jhye Richardson (twice) and Liam Livingstone put down more difficult chances to get him out.

Short needed three runs off the final delivery to bring up his century and he did it by ramping a Chris Jordan yorker onto the ropes for six.

The Hurricanes took 76 runs from the final five overs of their innings, but their total was by no means unreachable for the Scorchers.

However, Perth were in trouble when they slipped to 18-3 after 2.3 overs. Scott Boland (2-29) drew an edge that had Cameron Bancroft caught behind for a duck and on the next ball his fingertip deflection sent Marsh's drive down the ground onto the non-striker's stumps to run out Josh Inglis.

It might be a dropped catch. It might be unlucky for the Scorchers. It's definitely a Bucket Moment!#BBL09 | @KFCAustralia pic.twitter.com/2cJX5vBcBh

Marsh and Green steadied the ship for the Scorchers after the early inroads made by the Hurricanes, who saw Riley Meredith (side strain) and David Miller (calf) leave the field for treatment and not return.

McDermott missed a great chance to break their partnership when he failed to hold on after Marsh gloved Rogers down the leg side, but Nathan Ellis trapped Green lbw in the next over.

Marsh went on to rack up five fours and a six before a tremendous catch from Caleb Jewell ended his knock and the Scorchers finished on 172-8.

Caleb Jewell takes a terrific catch and Marsh needs to go for 48.