The increase of IPL teams, cricket's inclusion in the Olympics, compensation of domestic players were some of the key topics discussed during the BCCI's AGM. Here's a look at all the decisions taken 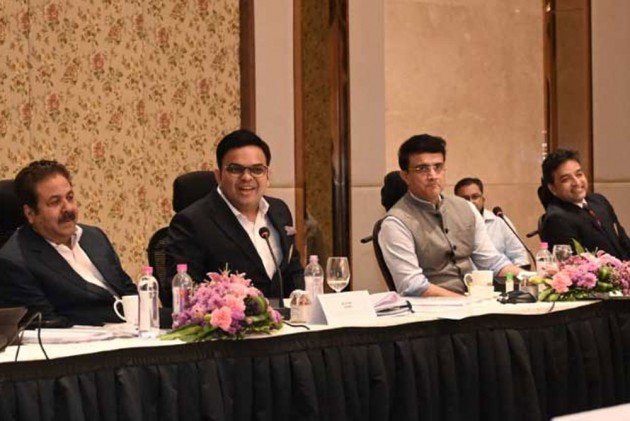 The Board of Control for Cricket in India (BCCI) held its 89th Annual General Meeting (AGM) on Thursday in Ahmedabad. During the meeting, the world's richest cricket board discussed a plethora of topics. (More Cricket News)

Here's a look at some of the key decisions taken:

The BCCI ratified the entry of two new franchises in the IPL to make it a 10-team affair from 2022. "Two new teams will be introduced in the 2022 IPL," a Board source said.

"The General Body authorised the IPL Governing Council to include up to 10 teams to the Indian Premier League. The IPL GC will work out the modalities regarding scheduling for up to 10 teams," BCCI secretary Jay Shah was quoted as saying in a press release.

In another major development, the Board, in principle, decided to back the ICC's bid for inclusion of cricket, in the T20 format, in the 2028 Los Angeles Olympics "after getting some clarifications from the International Olympic Committee".

"The General Body also decided to seek further clarification from the ICC on their proposal to include cricket in the 2028 Los Angeles Olympics," Shah said.

The Board, however, did not reveal the nature of its queries with regards to the matter.

A senior BCCI source said: "India will back ICC's push for cricket's inclusion in Olympics. Just we need to get some more clarity from ICC and IOC".

The BCCI has decided that if it does not get full tax exemption from the Government of India to host the World T20 next year, as sought by the ICC, then it would agree to deduct from its annual revenue of USD 390 million from the global body.

"We have told the ICC that we will approach our government for tax rebate but if we don't get that exemption, the amount, which is around USD 123 million, will be deducted from our annual revenue, so we will get around USD 267 million. But India is hosting the 2021 T20 World Cup," the source said.

Also, it was decided that all first-class players, both men and women, will be suitably compensated for the curtailed domestic season due to the COVID-19 pandemic.

The BCCI plans to get the domestic season underway, after several months' delay, in January with the Syed Mushtaq Ali T20 championship.

Asked about the money to be set aside for this, the Board source said: "The BCCI will give a lump-sum compensation amount to the state units. Now they will draw up their own list and accordingly compensate their male and female players."

There is another school of thought to directly pay the players.

"A working group is being formed to look at the compensation part," Shah stated.

The BCCI also increased the limit of reimbursement of insurance medical claim of retired First Class Cricketers to Rs 10 lakh.

Junior and women's cricket during IPL

The BCCI has decided that women's tournaments (senior and junior) along with age-group tournaments (U-23, U-19, U-16) will be held simultaneously at the time of IPL 14 which, in all likelihood, will be held in India despite the pandemic-related concerns.

In other decisions, veteran Congress leader Rajiv Shukla was officially anointed the Board's vice president in place of his protege Mahim Verma from Uttarakhand.

Brijesh Patel will continue as the chairman of the IPL Governing Council. Khairul Jamal Majumdar was also re-elected in IPL GC.

Ganguly-Shah to be India's face at ICC

It was also learnt that the general body decided in favour of BCCI President Sourav Ganguly continuing as a director in the ICC Board. Secretary Jay Shah will be the alternate director as well as India's representative at the Chief Executive Committee meets of the global body. The formal stamp will be given by office-bearers as per General body's decision.

The house deliberated on having women's Test matches and there could be a two-Test series in the offing next year but a final call in this regard will be taken by the BCCI Apex Council.

The BCCI has sacked GM (Game Development) KVP Rao, who was asked to resign.

Retirement age of umpires and scorers increased to 60

The BCCI's affiliated scorers and umpires will now retire at 60 instead of 55 years after the governing body ratified the move.

No discussion on Ganguly's alleged Conflict of Interest

There was no discussion on Ganguly endorsing My11 Circle fantasy gaming app, which is a direct competitor of Dream11 -- the IPL title sponsor.

"Not a single question was asked and contrary to a particular media report, it was never a topic of discussion.

"Ganguly is legally in the clear and as far as asking questions is concerned, the BCCI never questioned erstwhile N Srinivasan after his son-in-law was arrested for alleged spot-fixing in 2013. That was way more grave," a state unit member said.

The General Body approved the disbursement of funds to the ICA.

Decide the venues for the upcoming ICC T20 World Cup 2021.