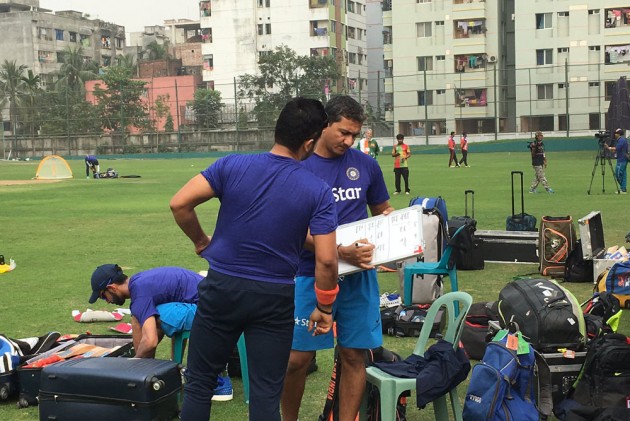 Sanjay Bangar, who has been sacked by the BCCI for alleged misbehaviour with national selector Devang Gandhi, will be questioned by The Board of Control for Cricket in India (BCCI), if outgoing administrative manager Sunil Subramanian or head coach Ravi Shastri file an official report regarding it. According to reports, the former India cricket team batting coach had confronted the selector after the West Indies tour in his hotel room and it wasn't a friendly exchange.

Bangar has been replaced by Vikram Rathour.

"In such a scenario, one needs to go strictly by the rule book. First and foremost, the man who Bangar is alleged to have insulted, the national selector Gandhi, he needs to officially report the matter," a senior BCCI official told PTI on conditions of anonymity.

From the support staff, Bangar is the only one who has faced the boot. The BCCI are unsure if the alleged confrontation should be pointed out as Bangar is no longer contracted by the board.

"Outgoing administrative manager Subramanian, in his mandatory report, needs to mention the matter clearly. Last but not the least, head coach Shastri, Bangar's reporting head, also needs to file it in writing that such an incident happened," the official said.

"If all these boxes are not ticked, then there is no question of placing it before the CoA (Committee of Administrators)," he added.

According to the officials who spoke to PTI, they agreed that Bangar was out of line to confront the selector although he had reasons to be disappointed.

"Anyone is bound to be disappointed after being sacked. But why did he think that he was guaranteed an extension? Shastri, Arun and Sridhar's performances were good and they were retained. Bangar's performance was rated poor, he was removed."

"Bangar had no business asking questions to Gandhi even if we factor in that he might not have barged in or shouted at Gandhi," an official said.

The BCCI have also been having discussions about possible action on anyone from a former support staff member or a player, who takes to social media to vent frustration.

"Yesterday, Saurashtra's Sheldon Jackson raised questions on social media about his non-selection in Duleep Trophy. Sheldon, we can still understand, scored 850-plus runs but Bengal's Manoj Tiwary? He was 39th in top run-getters list in Ranji Trophy and yet he criticised Gandhi for his Duleep omission.

"The selectors have not answered back as they are bound by contract unlike domestic players. It's time CoA formulates a policy, where there is some discipline among these players," the official said.