Bengaluru FC Vs Bashundhara Kings, Live Streaming : When And Where To Watch BFC-BK Match In India

All to play for as Bengaluru FC face Bashundhara Kings in AFC Cup. Catch match, team and telecast details here 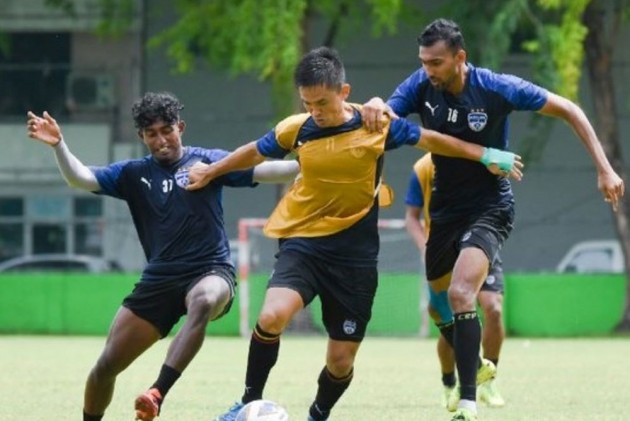 Bengaluru FC will have their task cut out as they look to return to winning ways against Bangladesh's confident side Bashundhara Kings in their penultimate AFC Cup Group D match here on Saturday. (More Football News)

Despite coming off a 0-2 defeat to ATK Mohun Bagan in their previous game, Bengaluru FC head coach Marco Pezzaiuoli on Friday maintained there was no pressure on his side as they prepare to face the Bangladesh Premier League champions.

Bashundhara Kings, who ran out 2-0 winners against Maziya S&RC in their first group stage game, will be eager to get the better of the Blues, who went down to ATK Mohun Bagan by the same scoreline.

An own-goal from Mohammed Irufaan, followed by a strike from Brazilian winger Robinho, sealed three points for Oscar Bruzo's side in their opening clash against Maziya S&RC.

Speaking to reporters ahead of the encounter, Blues' boss Pezzaiuoli said the Bangladeshi side were a force to reckon with, having made light work of their league campaign, which they secured with four games left to play.

"They score a lot of goals and have a strong defence, are compact at the back and counter very well.

The Blues are in training ahead of their clash against Bashundhara Kings. #WeAreBFC #BFCvBSK pic.twitter.com/vREquWxYbr


"We might have to change things a little bit because this is our third game. Our plan will be to maybe go backwards a bit and create space behind them to score goals and create chances," he added.

Bashundhara, who made their AFC Cup debut last season in a campaign that was cut short due to the COVID-19 pandemic, retained the 2020-21 Bangladesh Federation Cup in January.

Pezzaiuoli handed starts to Ajay Chhetri and Naorem Roshan Singh in the clash against ATK Mohun Bagan, while Leon Augustine, Parag Shrivas and Ajith Kumar came off the bench in addition to summer signings Bidyashagar Singh and Danish Farooq.

"In life you cannot be negative. I choose to take the positives from the previous game where we had almost 70% ball possession against ATK Mohun Bagan. I think we only need to improve in certain aspects.

"There is no pressure. Football is not about pressure. We enjoy the games, and I am sure every team wants to be the number one in the group," the Italian said.

Having signed several new foreign players in Raul Becerra, Jonathan Fernandes, Khaled Shafiei and Robinho (on loan from Fluminense), the Blues will have to be wary of Bashundhara Kings' attack, with the BPL side scoring as many as 67 goals in all competitions this season.

Bashundhara Kings have never faced Bengaluru before but head coach Óscar Bruzón said his team will be prepared to contain their opponents.

"This year we are placed in a tough group with quality sides and it's going to be challenging," said Bruzón.

"We respect every team in this group and we understand that Bengaluru need to win and we will try our best to manage the intensity with hope that our plan will work in our favour.

"We are comfortable with the conditions here in Male. The 4pm (local time) kick-off doesn't affect us in any way because the conditions are similar in Bangladesh and we think that this advantage can work in our favour." (With inputs from PTI)

The telecast of Bengaluru FC vs Bashundhara Kings match will be telecast live on Star Sports 2, Star Sports 1 Hindi and corresponding HD TV channels in India from National Stadium, Male, Maldives from Saturday, August 21, from 4:30 PM IST. For regional commentary, you can switch to Star Sports 1 Bangla and Star Sport 3.

Live streaming of the Bengaluru FC vs Bashundhara Kings match will be available on the Disney+ Hotstar.