Bhuvneshwar, who has had a lot of injury issues in the last two years, was the team's second highest wicket-taker in the three-match ODI series against England with six scalps. 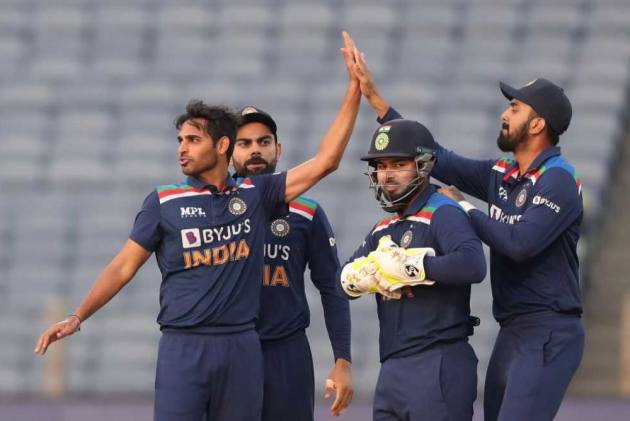 Coming back from an injury, senior India seamer Bhuvneshwar Kumar says he will have this summer's away Test series against England in mind while monitoring his workload management in the IPL, as red ball cricket remains "my priority". Highlights | Scorecard | News

Bhuvneshwar, who has had a lot of injury issues in the last two years, was the team's second highest wicket-taker in the three-match ODI series against England with six scalps.

Asked if he is thinking about making a comeback in Tests, Bhuvneshwar said: "Of course, red ball cricket is in my radar. I will prepare keeping red ball in mind. Although what kind of team will be selected for Test matches is entirely different scenario."

"My workload management and training during IPL will be keeping red ball in mind because I know there's a lot of Tests ahead and my priority still is Test cricket."

During the virtual press conference after India beat England by seven runs to clinch the series 2-1 on Sunday night, the UP seamer added, "So from my end, I will do everything to get ready for the Test series."

However, while he would prepare in earnest, Bhuvneshwar doesn't want to make too many plans as they can backfire due to various reasons.

"I have stopped making long term plans as in the past when I have done that, things haven't gone in my favour. Be it because of injury or form.

"But yes, workload management is something I will be seriously monitoring along with team management. So yes, since I was unfit for a long time, I had to ensure that I put a lot of emphasis on being fit.

"We have a lot of cricket ahead along with England tour, so I will try and keep myself fit," Bhuvneshwar said.

The 31-year-old Meerut-born speedster was content with his performance but maintained that there is always something to improve on.

"What I wanted to do in these matches, I got that, but there is always something to improve on, like it could be variations, fitness.

According to Bhuvneshwar, they knew that it would be difficult to bowl to England's attacking batsmen.

"As a bowler we had spoken that the way England play, they will give an opportunity but for that you need to bowl well. We see that the whole team plays attacking but is not that they play rare shots, or try to forcefully score runs.

"They catch the bad balls and also score off good deliveries, it is difficult to ball against such a team but we had spoken about how to face the situation."

He also said that there was no difference in the team culture.

"No, team culture was not different, it was there as usual, all are committed to fitness, be it captain or management, the same culture which was there three years back or one year back, still exists and the good thing is that the youngsters who are coming are motivated."

"He came on as a second change when the ball doesn't swing at all and it was a flat deck.

"It's very difficult for a bowler to bowl in such a situation, he changed the match during that phase, he played the role that usually spinners play, we were one spinner short today.

"He gave the breakthrough and gave us upper-hand," he said.

"The way he bowled in Australia, he was a crucial member and bowled well and won the series for the team, at a time when the settled players were injured.

"About Prasidh, the way he started in the first match, he went for runs, but the way he came back, it shows how much mentally strong he is. His four wickets were crucial.

"In the second and third game, knowing that the conditions were tough for bowling, but you have to bowl with confidence, and keep the momentum for the team, it was his first series and he must have learnt."