The 12 teams in the tournament are divided into four groups of three teams, with only the group winner advance to Friday's semifinals. 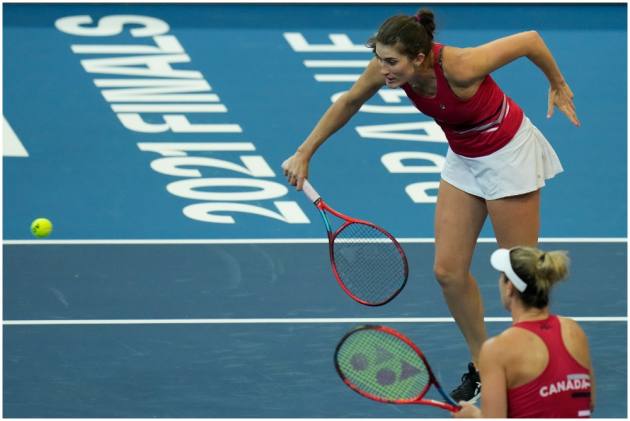 Canada won the decisive doubles match after securing a 2-1 victory over defending champion France in Group A of the Billie Jean King Cup finals in Prague on Monday. (More Tennis News)

“We should be really proud of ourselves,” Marino said.

“I was a little bit nervous at the beginning,” the Canadian said. “I'm happy it turned out in my favor.”

It was the second victory for Canada over France in the competition in five matchups, with the previous one coming in 1980.

In Group B, Belgium beat Belarus 2-1 in another opening match played on hard courts at the O2 Arena.

In doubles, Vera Lapko and Aliaksandra Sasnovich teamed up to take a consolation 6-4, 6-3 victory over Kirsten Flipkens and Mertens.

On Tuesday, Canada faces Russia and Belgium takes on Australia.

The competition, formerly known as the Fed Cup, was renamed last year to honor Billie Jean King and her lifelong battle for equality and social justice.

It was originally scheduled to take place in Budapest, Hungary, in April 2020 but was postponed for 12 months when the coronavirus pandemic was declared. In February, it was postponed again.

Organizers were then forced to find a new host — Prague — when Budapest backed out in May, citing lingering COVID-19 concerns.

The 12 teams in the finals this year are divided into four groups of three teams. Only the group winners advance to Friday's semifinals.