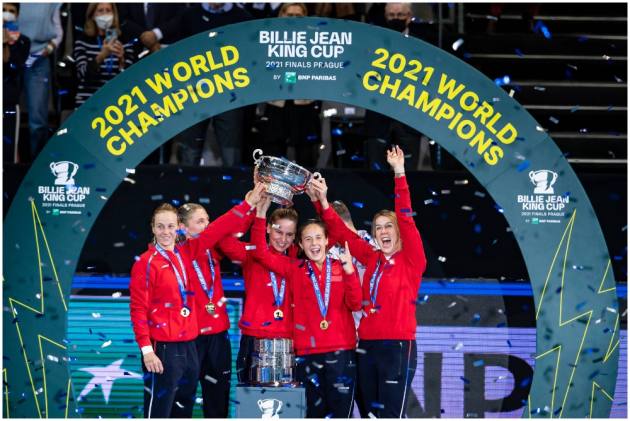 Russia won both singles matches to defeat Switzerland 2-0 in the final of the Billie Jean King Cup to claim the trophy for the fifth time. Liudmila Samsonova rallied to capture the decisive point with a 3-6, 6-3, 6-4 victory over Tokyo Olympics singles champion Belinda Bencic. (More Tennis News)

“It’s too many emotions now,” Samsonova said. “It’s unbelievable. I’m unbelievably happy.” Daria Kasatkina gave Russia a 1-0 lead with a 6-2, 6-4 victory against Jil Teichmann. The competition was formerly known as the Fed Cup. The trophy includes $1.2 million in the prize money for the winner with another $650,000 for the Russian Tennis Federation.

Samsonova broke the Swiss star in the opening game of the final set and held on to serve it out when Bencic’s backhand sailed long. Bencic stayed calm in the opening set against the big-hitting Russian, who produced 16 unforced errors compared to her three, and got the key break in the eighth game.

The day after! Still overwhelming ðð
I want to thank you all for your support and for your messages! â¤ï¸ And I also want to thank my coach and my team! This was so great guys!#teamsamsonova #tennis #BJKCup #bjkcupfinals #RusTennis @BJKCup @WilsonTennis pic.twitter.com/bzLUk4Zq7n

Samsonova improved in the second set, hitting 14 winners before serving it out. The 22-year-old Samsonova beat Sloane Stephens 1-6, 6-4, 6-3 and teamed up with Veronika Kudermetova to win the doubles in Friday’s semifinals against the United States on her debut for Russia.

She replaced originally selected Russian No. 1 Anastasia Pavlyuchenkova at the last minute. Pavlyuchenkova withdrew because of a left leg injury. Russia has all of its players in the top 50. Samsonova’s victory came after she beat Bencic twice at WTA tournaments in Berlin (final) and Luxembourg (quarterfinals) this year.

In a dominant display, Kasatkina blasted a forehand winner to earn a break point in the seventh game of the second set that she converted for a 4-3 lead. She was not able to hold her serve in the following game but got another break for 5-4 before serving the match out on her first match point.

The Russian stormed the opening set, breaking Teichmann three times and dropping her serve once. “I think the beginning was very important, we were both nervous but I managed little bit better the nerves,” Kasatkina said.

It was the second victory for the Russian in the tournament after beating Canada’s Carol Zhao in the group stage to improve her record in the competition to 5-1 while Teichmann recorded her first loss after three wins.

The Swiss reached their first final since finishing runner-up in 1998, their only final appearance. The 12 teams in the tournament were divided into four groups of three in a new competition format. Only the group winners advanced to the semifinals.

Russia dominated Group A in the tournament after victories over defending champion France and Canada before eliminating the United States in the semifinal. The United States is the most successful nation in the competition with 18 trophies.

Switzerland advanced to the semis from Group D, considered the toughest in the tournament, defeating both the Czech Republic and Germany on the way. In the semis, the Swiss swept Australia 2-0, winning both singles matches.

Prague’s tournament failed to attract bigger names including Garbine Muguruza, Karolina Pliskova and Aryna Sabalenka, who opted to get ready for the WTA Finals that open Wednesday in Guadalajara, Mexico.