In a shocking move, Quinton de Kock made himself unavailable for selection in South Africa's Group 1 Super 12 stage match against the West Indies, his decision coming after the CSA's diktat. 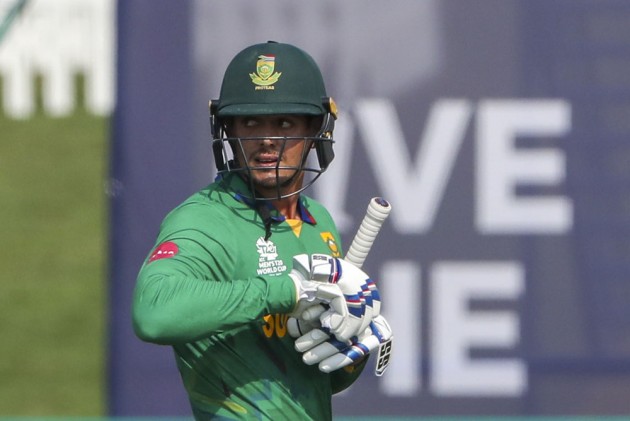 Cricket South Africa on Tuesday ordered its players to take the knee before their T20 World Cup matches in support of the 'Black Lives Matter' movement, a directive that led to Quinton de Kock withdrawing from the game against the West Indies and laying bare the internal faultlines on the matter. (More Cricket News)

In a shocking move, wicketkeeper-batter de Kock made himself unavailable for selection in South Africa's Group 1 Super 12 stage match against the West Indies in Dubai on Tuesday, his decision coming after the CSA's diktat.

The board said it will await a report from the management before deciding on the next move.

"Cricket South Africa (CSA) has noted the personal decision by South African wicketkeeper Quinton de Kock not to "take the knee" ahead of Tuesday's game against the West Indies," the CSA said in a statement.

De Kock has expressed his reluctance to make the gesture in the past as well saying, "It's everyone's decision; no-one's forced to do anything, not in life. That's the way I see things."

De Kock found support from his captain Temba Bavuma, the first black to lead the side. Bavuma also said that "it wasn't ideal" to get a directive on taking the knee hours before the start of the match.

"If there's a need for further conversations to be had, I'm sure those will definitely happen among the guys."

The country's cricket board, meanwhile, asked the players to follow the diktat and present a united front, citing the country's apartheid past when Black players were not allowed to be part of national teams.

"All players had been required, in line with a directive of the CSA Board on Monday evening, to "take the knee" in a united and consistent stance against racism.

"This is also the global gesture against racism that has been adopted by sportspeople across sporting codes because they recognise the power of sport to bring people together."

The CSA move is aimed at driving home the point that the board is serious about tackling racism and all forms of discrimination in the game.

"After considering all relevant issues, including the freedom of choice of players, the Board had made it clear it was imperative for the team to be seen taking a stand against racism, especially given SA's history.

"The Board's view was that while diversity can and should find expression in many facets of daily lives, this did not apply when it came to taking a stand against racism.

"The Board will await a further report from team management before deciding on the next steps. All players are expected to follow this directive for the remaining games of the World Cup."

The South African cricketers have been seemingly split on the issue and before their T20 World Cup opener against Australia, players were seen standing, kneeling or raising a fist.

Pacer Anrich Nortje and wicketkeeper Heinrich Klaasen stood with their hands behind their backs even as their teammates used different ways to express their support to the 'Black Lives Matter' movement. On Tuesday, both these players took the knee with the rest of the squad.

In the past few months, an inquiry has also been conducted on revelations made by black players about feeling isolated in the team. The side is currently being led Temba Bavuma, who is the Proteas first black captain.

The cricket fraternity too reacted to de Kock's sudden decision to pull out of the vital game for his team.

Before the start of the match, Indian cricketer Dinesh Karthik tweeted, "Quinton de Kock not playing because of his stand on BLM (Black Lives Matter) movement," with an image of de Kock refusing to take the knee.

Former Australia all-rounder Shane Watson said there must be some "internal issues".

"Huge shock. There must be something going on internally," Watson said on Star Sports.

"It's going to be big advantage West Indies now that de Kock is not playing," Lara said.

Earlier in the day, the CSA had stated that "concerns were raised that that the different postures taken by team members in support of the BLM initiative created an unintended perception of disparity or lack of support for the initiative."

"Taking the knee is the global gesture against racism adopted by sports persons across the globe."

The Indian cricket team had also taken the knee ahead of its tournament-opener against Pakistan on Sunday.

The CSA pledged its support to BLM movement.

"Race should not be manipulated to amplify our weaknesses. Diversity can and should find expression in many facets of our daily lives, but not when it comes to taking a stand against racism," CSA Board chairperson Lawson Naidoo said in the statement.

"South Africans were recently joined by people across the world in celebrating the 90th birthday of our revered Archbishop Desmond Tutu.

"What better tribute from the Proteas to an icon of the struggle for freedom in South Africa than to demonstrate we are working to fulfil his vision of a united South Africa."

"Surely it's down to the individual to decide whether he or she wants to be involved in any movement … A Cricket board should request players to do it but if that individual decides they don't want too (sic) it should not stop them playing the game of Cricket," he tweeted.