India's ex-head coach Ravi Shastri feels that during COVID-19 times, it's too hard on one man to lead in all formats -- Tests, ODIs and T20 internationals. Virat Kohli leads in Tests only. 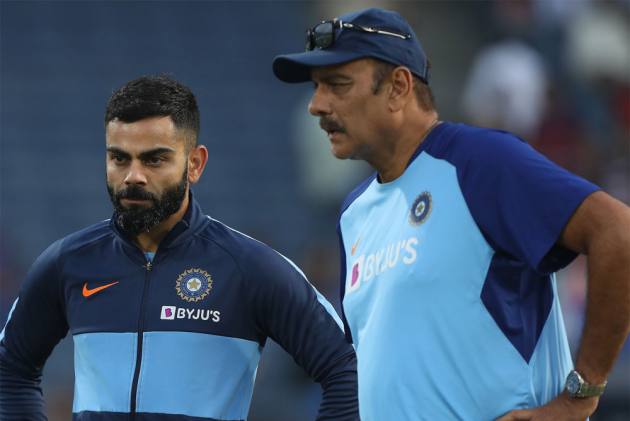 Ravi Shastri has endorsed the decision to have two captains for the Indian cricket team. Earlier this month, the Board of Control for Cricket in India removed Virat Kohli as ODI captain under controversial circumstances. (More Cricket News)

In an interview to a sports channel, Shastri has backed the decision of the BCCI to have two captains -- Rohit Sharma for the limited overs (white ball) games and Virat Kohli for the five-day or red ball format.

Ravi Shastri, who was at the helm of Indian cricket for four years and formed a solid partnership with Kohli, said: "I think it’s (split captaincy) the right way to go. This could be a blessing in disguise for Virat, and for Rohit because I don’t think in this era if the bubble life exists for another year or so, one guy to handle all three is not easy at all.”

It may not be music to Kohli's ears, but Shastri's viewpoint is clearly aimed at the longevity of Kohli's cricket career and not as an Indian captain, which can be a thankless and painful job.

Kohli's Test career has been foundering considering the lofty standards he has set for himself. Kohli has not scored an international century in over two years and in the first Test against South Africa at Centurion on Sunday, paid the price for chasing a wide ball of pacer Lungi Ngidi after making a good start.

When Kohli decided to quit as T20 captain of the Indian team and Royal Challengers Bangalore, he had consulted a 'core' group that included Shastri, among others. In September, Kohli made it clear that he wanted to lead in both Tests and ODIs.

The decision to sack him as ODI captain came as a shock to Kohli. He certainly wasn't prepared for the disdainful manner in which the selectors (read: BCCI) handed the ODI captaincy to Rohit Sharma. Kohli's removal was a footnote in a press release announcing the Test squad to South Africa on December 8.

Then Kohli opened a can of worms contradicting Sourav Ganguly's comments that the BCCI president has asked Kohli "not to quit as T20 captain and continue leading India."

Ganguly later defended the decision to have two captains but did not explain why Kohli was so contemptuously removed.

As dust settles over the captaincy controversy, Shastri's comment on split captaincy should cool some frayed nerves, especially those of Virat Kohli's.

Kohli has bigger goals to achieve and Shastri knows that better than anyone. With no strings attached anymore, Shastri says Kohli and Rohit Sharma are two big assets and can only serve Indian cricket well in future.

Shastri said he and Kohli taught India to be aggressive and play bold. "We’re both pretty aggressive, we wanted to play to win. We realised very quickly that to win you need to take 20 wickets, deciding to play aggressive and fearless cricket. It meant at times you would lose games but once you got one across the line, then it's infectious," said Shastri in the interview to STAR Sports.

New coach Rahul Dravid knows the definition of aggression. Only Kohli has to match his wavelength with Dravid's conservative approach. And split captaincy will certainly help Kohli. Only runs can save his position in the India team. Captaincy is not everything.