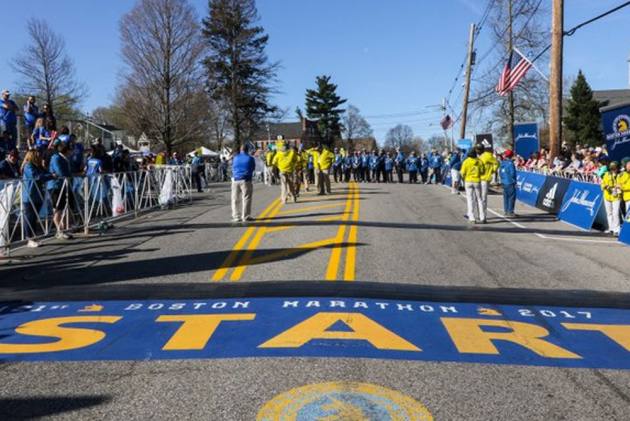 Fast-moving, light rain and weather in the 50s greeted the runners gearing up for the Boston Marathon, which is happening Monday for the first time since the pandemic began. (More Sports News)

Race Director Dave McGillivray sent a group of about 30 from the Massachusetts National Guard that walks the course annually out at 6 a.m., announcing the start of the event. McGillivray said after that he was relieved to finally be back.

“It's a great feeling to be out on the road,” he said.

“Everyone is excited. We're looking forward to a good day.”

Last year's race was postponed until September because of the pandemic, then called off for the first time in its history. Registered runners were encouraged to complete the distance by themselves as a virtual event. This year's race was moved from Patriots' Day in April in hopes that the pandemic would abate.

Everything is different. It's the first fall edition of the marathon ever. Runners had to show proof that they're vaccinated or they had to test negative for COVID-19.

They're being bused from Boston at staggered times for a rolling start. They're not waiting and stretching in the traditional athletes' village before lining up in corrals. They're expected to walk to the start and go. Masks are required until they cross the start line.

Doug Flannery, a 56-year-old Illinois resident, was at the start, waiting to run his sixth Boston Marathon. He said the COVID-19 procedures went smoothly at the medical tent and it's great to be toeing the line at a race again.

“I love that we're back to races across the country and the world,” he said.

“It gives people hope that things are starting to come back.”

For social distancing, the field is about one-third smaller, with roughly 18,000 runners instead of 30,000. It includes more Americans than normal since many athletes from countries with strict quarantine rules couldn't attend. Nearly 30,000 people are running the virtual event.

The crowds along the course are expected to be smaller. Wellesley College students have been told not to kiss the runners as they pass the school's iconic “scream tunnel” near the halfway mark.

National Guard Capt. Greg Davis, 39, joined in with the military group to walk the course for the fourth time.

“We took things for granted before COVID-19. It's great to get back to the community and it puts things in perspective,” he said.

Lawrence Cherono and Worknesh Degefa are not returning to defend their titles from 2019. But 13 past champions and five Paralympic athletes who won gold in Tokyo are competing in the elite field, according to the Boston Athletic Association.

That group includes Lelisa Desisa, who won the men's race in 2013 and 2015 and finished second in 2019 by two seconds; Desiree Linden, who in 2018 became the first U.S. woman to win since 1985; Yuki Kawauchi who in 2018 earned Japan's first Boston title since 1987; reigning women's wheelchair champion and course record holder Manuela Schär; and reigning men's wheelchair champion Daniel Romanchuk, who won at the Chicago Marathon just yesterday.

Massachusetts native Shalane Flanagan, a New York City Marathon winner, is expected to run Boston as part of a quest to complete the six major marathons consecutively this autumn. Flanagan, who retired from professional running in 2019, ran the third race in the series, the Chicago Marathon, yesterday. Retired race car driver Danica Patrick plans to run the Boston Marathon for the first time.