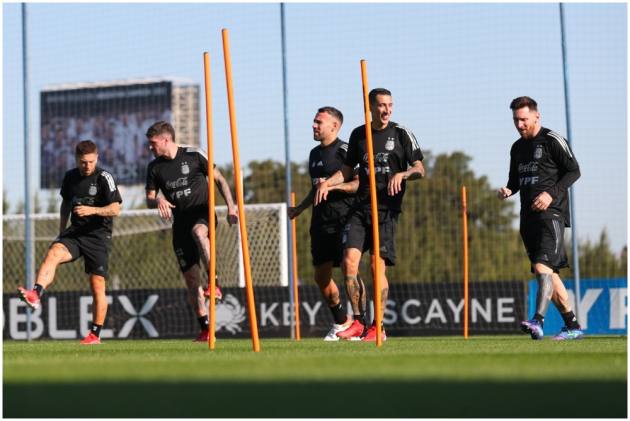 Brazil and Argentina will be hoping to avoid any more interruptions when the 2022 FIFA World Cup qualifying resumes Thursday across South America. (More Football News)

The game between the two rivals in Sao Paulo last month was suspended shortly after kickoff after a Brazilian health official entered the pitch to remove four Argentina players he considered should be in quarantine due to COVID-19 protocols.

Both teams then earned victories in their second games of that international window to remain on course for a place in 2022 FIFA World Cup in Qatar.

And similar scenes should be avoided when Brazil, who top the qualifying standings, visit last-placed Venezuela and second-place Argentina travel to Asuncion to face Paraguay.

This time, England-based players have been allowed to travel to South America despite Britain’s strict COVID-19 restrictions.

Premier League players will have to show they have been fully vaccinated to avoid 10-day quarantine after they return to their clubs. Also on Thursday, third-place Uruguay will host Colombia. Ecuador, in fourth place, will play Bolivia and Peru host Chile.

Brazil has 24 points and Argentina has 18 from eight matches. Uruguay (15), Ecuador (13) and Colombia (13) follow, but they’ve all played nine matches.

The top four teams secure a spot at next year’s World Cup in Qatar. The fifth-place team will enter a playoff against a team from a different confederation.

A win in Venezuela would put Brazil on the verge of qualifying for Qatar, but coach Tite might be without a key starter. Midfielder Casemiro is out with an injury, with Liverpool’s Fabinho seen as his likely replacement.

Fabinho is one of several England-based players, including goalkeeper Ederson, defender Thiago Silva and striker Gabriel Jesus, who couldn’t play in the previous international window amid pressure from their Premier League clubs.

Jesus, who hasn’t played for Brazil since the Copa America quarterfinals, was widely criticised at home after the last World Cup in Russia, when he failed to score a single goal. Brazil lost to Belgium in the quarterfinals but Jesus said he’s already thinking about redeeming himself in Qatar.

“I don’t think I will erase 2018, but I will write another story,” Jesus said at a news conference on Tuesday. “Now we have a new group.”

Paraguay’s well-organised and defensive team has often given Lionel Messi’s Argentina side a difficult time. Argentina managed to beat Paraguay 1-0 at the Copa America, but their previous four meetings resulted in three draws and a win for Paraguay.

Expect another tough game for Argentina on Thursday, with Paraguay coach Eduardo Berizzo — an Argentine — having already said he will use a back five to stop Messi and his teammates.

Argentina coach Lionel Scaloni is sticking with much of the squad that won the Copa America in July, the country’s first major title in 28 years and Messi’s first with the national team.

“There is a foundation of 80 or 90 per cent that is repeated in this squad,” Scaloni said. “That gives you some ease, despite the little time we have to work.”