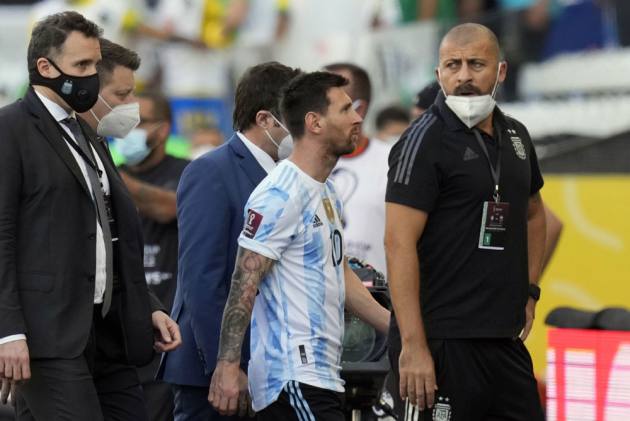 The match was interrupted after seven minutes when an Anvisa agent and a policeman walked on to the pitch at NeoQuimica Arena to remove four Argentina players who the agency says should be in quarantine. Later the match was suspended.

Goalkeeper Emiliano Martínez, defender Cristian Romero, midfielder Giovanni Lo Celso and winger Emiliano Buendia are English Premier League players who were in the United Kingdom in the previous 14 days upon their arrival in Brazil. They are investigated for allegedly providing false information.

FIFA has opened an investigation. A decision has not been make on whether the match will be replayed.

“We stress the lack of collaboration in the fulfillment of health protocols by those involved (CBF, CONMEBOL, AFA and the players themselves), who deliberately obstructed and embarrassed public officers as they performed their duty in favor of the Brazilian people's health,” Anvisa said in a statement published Wednesday.

The two national soccer federations and CONMEBOL deny any wrongdoing. But Anvisa said in its report that the three soccer bodies attempted to mislead the status of the four players up to one hour before kickoff.

Anvisa said it warned the soccer bodies about the need for isolation of those players since Saturday, and accuses them of not disclosing that they had been recently to the U.K., a country that is in Brazil's red list for COVID-19.

Anvisa said its agent decided to enter the pitch after he heard the national anthems being played, which he considered the final evidence of noncompliance with Brazil's health regulations.

“As we arrived at the tunnel we stopped because we saw the match was under way. So we begin a series of conversations with several people who identified as members of CONMEBOL, CBF and AFA,” Anvisa said, quoting the agent who entered the pitch.

“In contact with (match official) Rodrigo Luis and (police) investigator Pedro Henrique, I asked whether we could come onto the pitch to notify the players. They said yes. Investigator Pedro moved ahead and I followed,” the report said.

“A CBF representative tried to argue about waiting until the break so they could be substituted. We didn't agree because that was not a negotiation, it was a legal action and a corrective for their noncompliance. We insisted the four players should be notified,” the agent said, adding he never meant to halt the match.

Earlier on Wednesday, Argentina coach Lionel Scaloni defended his decision to field three of four players in question — Buendia was not in the stadium, the three others were starters.

“We had an OK from CONMEBOL, players went to the pitch and played,” Scaloni said ahead of Argentina's match against Bolivia on Thursday, also in World Cup qualifiers.

”Not in any moment did we leave the pitch by our initiative, only when the CONMEBOL official told us to."

Brazil, however, never left the pitch and held a training session after the match was suspended.

Coach Tite suggested at his news conference the four players were to blame for the chaos.

“All comments by Anvisa, the health ministry are correct. Soccer is not above laws, we are dealing with lives here,” Tite said before Brazil's match against Peru.

“To come here and go over laws, dribble some situations . . .That has no place.”