England international Callum Hudson-Odoi signs a new long-term contract at English Premier League club, Chelsea having been linked with a move away previously 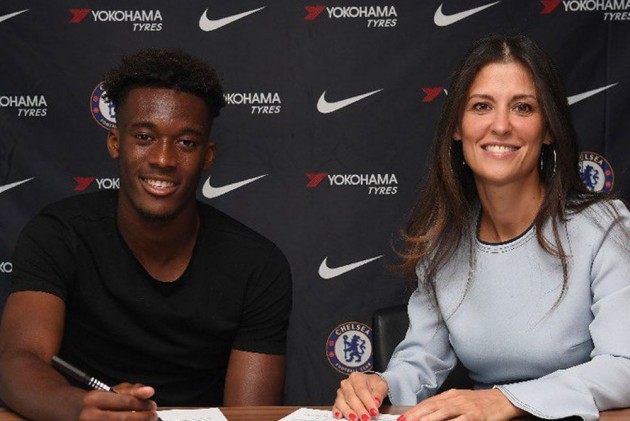 Callum Hudson-Odoi has signed a new five-year contract at Chelsea, the club has confirmed.

Securing the teenager's signature is significant for Chelsea, who rejected several bids from Bundesliga champions Bayern Munich earlier this year.

The German giants made their interest known in January, reportedly leading Hudson-Odoi to submit a transfer request, and are said to have returned with a reduced £22.5million (€25.4m) offer as the winger entered the final 12 months of his previous deal.

Chelsea resisted Bayern's interest and have now tied the talented homegrown prospect to an agreement reportedly worth upwards of £100,000 per week.

"It's an amazing feeling," Hudson-Odoi told Chelsea's official website. "It's been a long wait but it's done now and I'm really happy about that. I've been a Chelsea player since I was eight and this is the right club for me to be at.

"I want to lift as many trophies as possible, win as many games as possible and contribute to as many goals as I can as well. As a team, we just want to work hard to achieve the best results we can.

"I'm delighted everything has been agreed and now I'm just looking forward to properly getting back."

A new five-year deal for @Calteck10!

Hudson-Odoi had to be patient before forcing his way into former boss Maurizio Sarri's starting XI in April, only for a ruptured Achilles to end his season in the same month.

The 18-year-old earned made his return in an Under-23 game against Brighton and Hove Albion last week and is nearing a return to first-team action.

"I have seen Callum come through and he's a fantastic talent," Lampard said. "He is going to be central for us on the pitch and that is the opportunity in front of him now.

"Callum can show, right here at Chelsea, the club he came through the academy at, that he is going to be a world-class player because I truly believe that."

It has been reported the Blues are also looking to tie down Fikayo Tomori and Tammy Abraham to extended new deals.