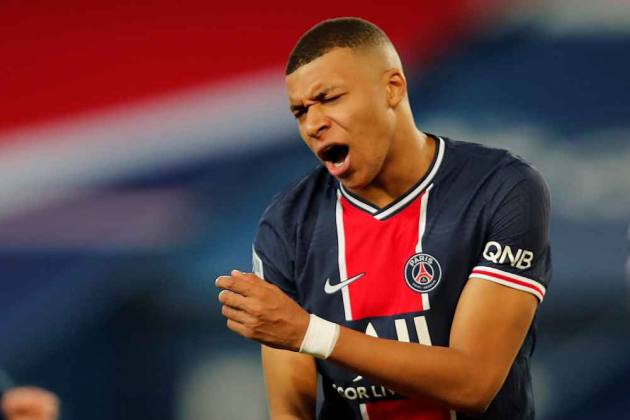 Kylian Mbappe scored twice and Pablo Sarabia was also on target as Paris Saint-Germain saw off fellow Ligue 1 side Brest 3-0 to book their place in the last 16 of the Coupe de France. (More Football News)

The holders were given a tough time of things in their 1-0 win against Caen in the previous round but made light work of Saturday's clash at Stade Francis-Le Ble.

Sarabia fired in his sixth goal of the campaign shortly before half-time after Mbappe had opened the scoring inside nine minutes with an impressive solo strike that saw him carry the ball half the length of the field.

Mbappe doubled his personal tally for the day with an unorthodox chested finish to ensure comfortable passage through for PSG, who made it three wins in a row heading into Wednesday's Champions League last-16 second leg with Barcelona.

Mbappe also scored a brace in last week's comfortable Ligue 1 win at Dijon and picked up from where he left off with the opener against opponents positioned 13th in the French top flight.

The France international received the ball just inside the opposition half, carried it to the edge of the penalty area and picked out the top-left corner with a thunderous strike that left Sebastien Cibois rooted to the spot.

Mbappe was denied a second by the inside of the post when played in by Marco Verratti but PSG, who survived a penalty scare after Romain Philippoteaux went down under contact from Abdou Diallo and Mitchel Bakker, soon had a second goal.

Julian Draxler took the ball past a couple of opponents and teed up Sarabia to fire away from Cibois, adding to the goal he scored against Brest in PSG's 3-0 league win when the sides last met in January.

Cibois denied Mbappe from a one-on-one early in the second half and that sparked Brest into life, with Bandiougou Fadiga testing Sergio Rico with a couple of attempts in the space of a minute, the second requiring Ander Herrera to block the ball on the line.

But the hosts' hopes of a comeback were ended 17 minutes from time as Verratti's pass ricocheted off the chest of Mbappe and trickled in from a few yards out.

What does it mean? PSG carry momentum into Barca tie

PSG have won this competition a record 13 times, including five in the past six years, and remain on course to defend their crown following this routine win.

The Parisians have now won eight of their past nine games in all competitions - the exception being a 2-0 loss to Monaco in the league - and have momentum ahead of Wednesday's showdown with Barca, who they lead 4-1 from the first leg.

The Frenchman was suspended for PSG's win at Bordeaux in midweek, perhaps explaining Mauricio Pochettino's decision to name him in the starting line-up against Brest.

It was a gamble that paid off as Mbappe scored a couple of goals - one sublime and the other rather fortunate - from his five efforts, more than any other player attempted.

Paredes was making his first appearance since the 2-0 loss to Monaco and played an important role in this victory, even if he mustered only a single shot of his own.

The midfielder attempted 95 passes, 89 of those successful, and gained possession 12 times, leading the way in each metric for PSG and possibly playing his way into the side to face Barca.

PSG face Barcelona in that huge Champions League last-16 second leg in midweek, while Brest have a week's rest before travelling to Marseille for their next Ligue 1 outing.