Brest Vs PSG, Angers Vs Lille, Live Streaming: When And Where To Watch French Ligue 1 Season Finale

French football league champions of the 2020-21 season will be decided on the final day. Check matches and telecast details here 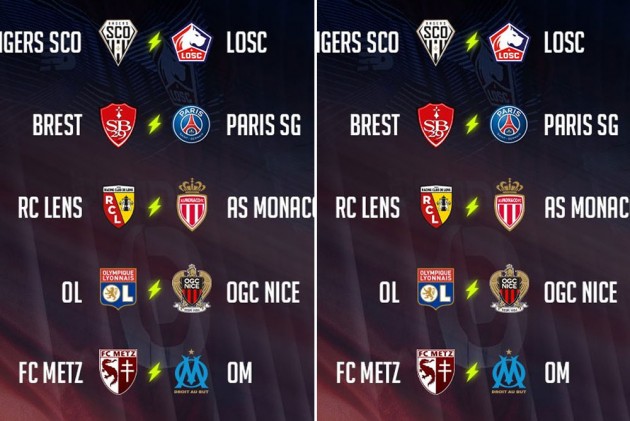 Christophe Galtier's Lille need a victory at Angers to guarantee their first Ligue 1 title for 10 years and cause a huge upset by stopping Paris Saint-Germain from retaining a title they are so used to winning.

But Mauricio Pochettino's PSG may have a tougher game because they are at a Brest side in 16th place, and not safe from 18th — the promotion-relegation playoff.

Third-place Monaco are the outside contenders to win their first title since 2017. But the principality side need both Lille and PSG to lose as well as a superior goal difference to Lille if they finish level on 80 points.

Monaco can also ill afford a slip at sixth-place Lens since they are only one point ahead of fourth-place Lyon.

If Monaco draw and Lyon win at home to Nice then Lyon take third and enter the Champions League qualifying.

As things stand, Lille (80) have a one-point lead at the top of the table, ahead of defending champions PSG (79). Monaco are third with 77, while Lyon are fourth with 76.

At the opposite end, Dijon are already relegated afte winning just three in their previous 37 outings. But who join them in the drop will be decided from seven teams. Nimes are 19th with 35 points, and they can still avoid relegation with a win and some favourable results from other fixtures. For that matter of fact, Reims at 13th are not safe, They have 42 points.

And of course, the key players and their stats -

Kylian Mbappe, with 26 goals, has overshadowed Neymar in the PSG. He all but assured of winning the scoring charts. Memphis Depay of Lyon and Wissam Ben Yedder of Monaco are joint second with 20 goals each. Depay also has 10 assists, joint most with Dimitri Payet of Marseille. Zinedine Ferhat of Nimes has also 10 assists.

A lot to play for.

Check the global broadcasters list HERE. But live updates can be followed on club websites and their respective social media pages.