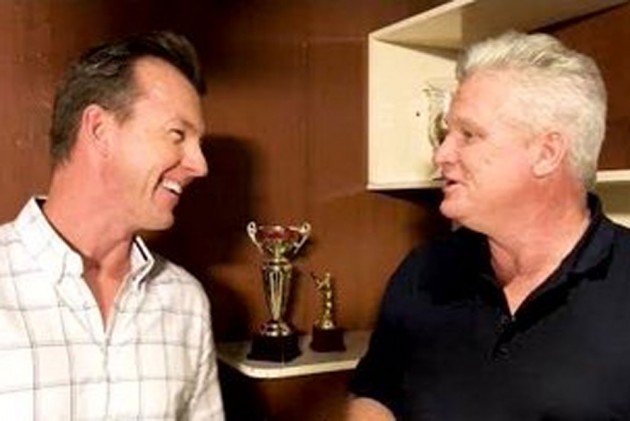 As the cricket world mourns the death of legendary Australian batsman Dean Jones, heartbreaking details emerged on Thursday how Brett Lee tried to save his compatriot in Mumbai. (More Cricket News)

Before the start of today's match between Kings XI Punjab (KXIP) and Royal Challengers Bangalore (RCB), players also paid their tribute to Jones in Dubai. Although the teams did not line up to observe a minute's silence in memory of Jones, the players wore black armbands.

According to reports, at around 11 am, Jones, after finishing his breakfast, attended a briefing session for the day’s IPL broadcast. He then was seen enjoying a casual session of bat and ball with colleagues in the corridors of the hotel he was staying in South Mumbai.

Jones suddenly collapsed in the lobby of the hotel with former fast bowler Lee standing by his side. According to Daily Mail Australia, Lee desperately tried to revive him with CPR (Cardiopulmonary Resuscitation). But in vain.

It's also reported that Jones went for a run in the morning.

Later in the day, Lee and Scott Styris paid tribute Jones as they appeared in the Star Sports' IPL show.

"He would've wanted us to be here tonight because it’s pretty much Deano's dug-out tonight, an absolute legend. Obviously, the first thing is we send our condolences to his family, a really tough day for everyone, not only for his friends and family but also for the cricket world.

"What Deano would’ve wanted is for us to come out here in the dugout, get it done, have some fun for the game we all love,” said Lee as he tries to console Styris.

The former New Zealand all-rounder said that Jones "was on to me every day with new ideas on how we can make it better. So I think it’s the right thing to do to be here, it’s gonna be hard but we hope t make him feel proud tonight.

World Cup winner Jones was considered a pioneer in ODI cricket with his attacking approach at the crease, scoring 6,068 runs at an average of 44.61 in 164 matches.

In a statement, ICC Chief Executive Manu Sawhney said: “We are extremely sad to hear of Dean’s sudden death and I would like to extend our deep condolences to his family and friends on behalf of the ICC."

Absolutely heartbreaking news about Dean Jones passing away.
A wonderful soul taken away too soon. Had the opportunity to play against him during my first tour of Australia.
May his soul rest in peace and my condolences to his loved ones. pic.twitter.com/u6oEY1h7zz

Tendulkar's great rival and former West Indies captain Brian Lara added: "I love you too Dean Jones!! You have been a joy and absolute pleasure to work with @StarSportsIndia The world has lost a real legend and lover of our great game, Cricket. You will be dearly missed by many. RIP my brother. My sincere condolences to the Jones family."

"What a great player and a great bloke. We are shocked and very sad to hear of his passing," Langer said.

"Deano was a true legend of Australian sport and world cricket, one of the great players and personalities in a golden time for the game. His role in the team's World Cup win in 1987 and the 1989 Ashes under AB [Allan Border] were a huge turning point for Australian cricket.

"His double century [against India] in Madras was one of the greatest and most courageous innings of all time.

"We can only hope to make Australians as proud of our team as they were of Deano, he will be missed by the game and millions of people around the world. Our love to Jane [his wife] and the girls."

Darren Lehmann, the former Australia batsman and head coach, tweeted: "Dean Jones will be missed, he taught me so much on and off the ground, I and all of the cricketing world will miss him. Our thoughts are with Jane and the family at this time, lots of love from the lehmanns xx"

Australia's current limited-overs captain Aaron Finch tweeted: "Still in shock hearing the news of Deano's passing. Thoughts are with Jane and the family at this incredibly tough time. A great man with an amazing passion for the game."

Former England spinner Graeme Swann, now working as a commentator, added: "I can’t put into words how numb and shocked I am that Dean Jones isn’t sat next to me today making me laugh with his endless anecdotes and Aussie banter. He was a boyhood hero of mine, an icon of the game and a good friend. RIP Deano."

Afghanistan captain Rashid Khan posted: "Absolutely Shocked and deeply sad to hear about the sudden demise of @ProfDeano. My condolences to his friends and family. You will be missed #RIP."