Liverpool had to settled for a share of the spoils on the south coast as Pascal Gross scored a stoppage-time, VAR-assisted penalty 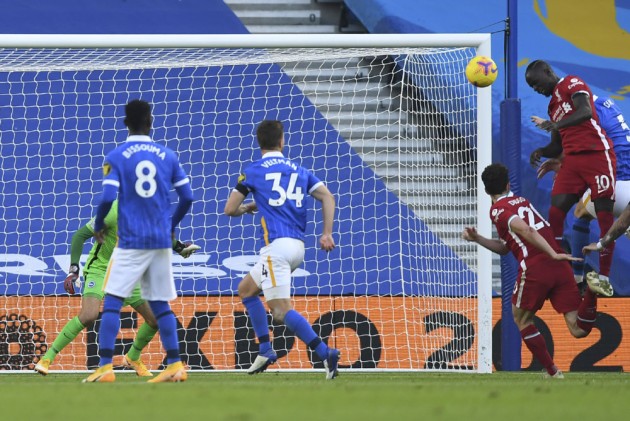 Liverpool were denied victory by VAR as Andrew Robertson was penalised late on to allow Brighton and Hove Albion to rescue a 1-1 Premier League draw at the AMEX Stadium. (More Football News)

Diogo Jota's ninth Liverpool goal looked set to prove enough for the Reds to move three points clear of Tottenham at the top of the table, but the Reds' work was undone in stoppage time.

Robertson swung out a foot and clipped Danny Welbeck and, though referee Stuart Attwell spotted no infringement, he changed his decision once he checked the pitch-side monitor.

Unlike Neal Maupay, who drilled wide from 12 yards to let Liverpool off the hook in the first half, Pascal Gross made no mistake.

It was a third VAR call of the game that went against Liverpool, with Mohamed Salah and Sadio Mane having goals rightly ruled out for offside as Jurgen Klopp was left to rue the technology once more.

Brighton should have been ahead in the 10th minute, only for Aaron Connolly to slice wide when one-on-one with Liverpool centurion Alisson.

Connolly atoned nine minutes later, drawing a clumsy tackle from Neco Williams in the area, only for Maupay to side-foot a dreadful penalty wide of the right-hand upright.

Maupay lasted just another three minutes before succumbing to an apparent hamstring injury, and Brighton looked to have been made to pay when Salah latched onto Roberto Firmino's pass and lobbed Mathew Ryan, but VAR ruled the goal out for a marginal offside.

Connolly was seething when he was replaced by Adam Lallana, who lasted just eight minutes, and Salah looked equally as infuriated after he made way.

Salah's replacement Mane had a fine header disallowed as Liverpool seemed set to clinch the points, but the Reds' hopes of a win were snatched away in the closing moments.

Robertson hit Welbeck and, after VAR Kevin Friend advised Attwell to check the screen, Brighton were awarded their second spot-kick – Gross sending a cool finish down the middle to salvage a point.

6 - Liverpool have dropped more points from winning positions this season (6) than they did in the whole of last season (5). Drama. #BHALIV pic.twitter.com/69oIaaKcTc

What does it mean? Depleted Reds back on top, but that will not last

With Tottenham playing Chelsea on Sunday, Liverpool – who have 21 points, seven less than they had at this stage last season – will not be top by the end of the weekend no matter what happens at Stamford Bridge.

Klopp has not been happy with the Reds' hectic schedule, and his anger is unlikely to have been lessened with the late blow, combined with a hamstring injury to James Milner.

Eight in eight for rampant Jota

Brought in primarily as support for Liverpool's front three, Jota has given Klopp a real selection headache.

Starting on the left initially, the former Wolves forward was often on the fringes, but stepped up with a moment of real quality when he slotted in his eighth goal in his last eight appearances in all competitions, though it was ultimately not enough for victory.

It was a difficult three minutes for Brighton forward Maupay, who missed Brighton's first spot-kick before hobbling off injured, though at least his blushes were sparred by Gross.

Maupay is the first player to start a Premier League game, miss a penalty, and be subbed off before half-time since Arsenal legend Dennis Bergkamp against Derby County in April 1998.

- Liverpool have gone unbeaten in each of their last 12 matches against Brighton in all competitions, with Saturday's draw ending a nine-match winning run against the Seagulls.
- Brighton are without a win in their last nine home games in the Premier League (D4 L5) – their longest winless run in the competition on home soil.
- Liverpool conceded two penalties in a single Premier League game for the first time since February 2018 against Tottenham.
- Salah has been directly involved in nine goals in his seven Premier League games against Brighton. Against no team has he registered more goal involvements in the competition.
- Neco Williams (19 years and 229 days) became the youngest Liverpool player to concede a Premier League penalty since Joe Gomez against Manchester United in September 2015.

Liverpool have a crucial Champions League clash with Ajax coming up on Tuesday, while Brighton next go up against Southampton in a south-coast derby on December 7.