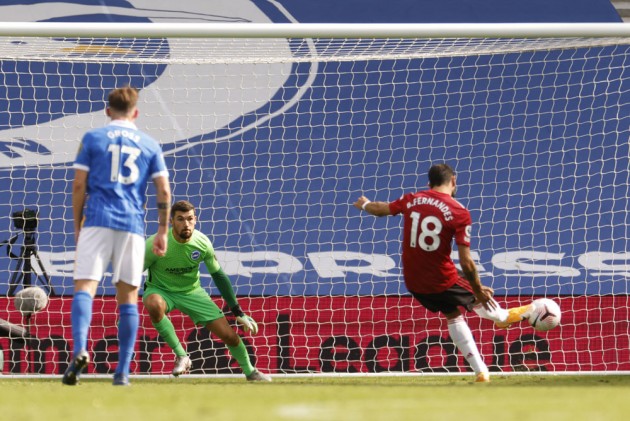 Bruno Fernandes scored a penalty with the last kick of an astonishing game as Manchester United stole a 3-2 win over a Brighton and Hove Albion side who struck the woodwork five times. (More Football News)

The Portuguese kept his cool to settle matters at the end of a dramatic encounter at the Amex Stadium in which United rode their luck to the extreme.

Brighton, showing no signs of fatigue despite facing a fifth game in 13 days, hit both posts and the crossbar in the first half before breaking the deadlock via Neal Maupay's nerveless Panenka penalty.

United – needing a response to their limp opening-game loss to Crystal Palace – levelled within 187 seconds, though, Lewis Dunk unfortunate to divert past Mat Ryan from close range after Fernandes' set-piece caused problems.

Referee Chris Kavanagh chalked off a penalty he had awarded early in the second half after reviewing the incident himself, allowing Paul Pogba to breathe a sigh of relief after Aaron Connolly took a tumble.

Ole Gunnar Solskjaer's men made full use of the reprieve as Marcus Rashford, having just seen a goal disallowed, brilliantly danced his way into the box and fired home via a deflection off Dunk.

Graham Potter was cursing his luck when Solly March and Leandro Trossard hit the post and crossbar respectively, before jumping for joy when the former headed in a stoppage-time equaliser.

But the drama was not over and Maupay handled Harry Maguire's header, which was cleared off the line by March, allowing Fernandes to wrap up the points from the spot in a game that will live long in the memory.