The wrestler, apparently an overage competitor, was not allowed to participate in U-15 National Wrestling Championships. BJP MP Brij Bhushan Sharan Singh, slapped the wrestler since he could not pacify him. 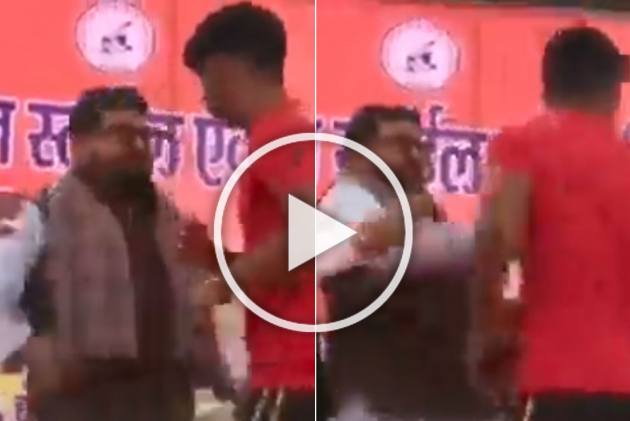 Brij Bhushan Sharan Singh, the president of the Wrestling Federation of India (WFI), found himself in trouble after losing his cool during the Under-15 National Wrestling Championships at Shaheed Ganpat Rai Indoor Stadium, Ranchi on Friday. (More Sports News)

The 64-year-old Brij Bhusan Sharan SIngh, who is also BJP MP from Kaiserganj constituency in Uttar Pradesh, slapped a wrestler from the state on the stage during a first-round competition of the national championships.

Brijbhushan Sharan Singh, who is also the president of Wrestling Federation of India, was seen hitting the young wrestler twice before he left the stage in Ranchi.#BJP #wrestling pic.twitter.com/MFsXVnY1t0

After the incident, many wrestlers demanded an apology from the WFI president. Brij Bhushan was present as chief guest on the first-day competition.

According to reports, during the age verification, the wrestler was found to be above 15 years of age and was stopped from participating in the competition.

But the wrestler lodged a complaint and then stepped onto the stage and started arguing with the WFI president.

Brij Bhushan Sharan Singh, who was reportedly trying to pacify the wrestler, lost his cool and slapped the wrestler in front of everyone.

Brij Bhushan became the president of WFI in 2012. He was elected unopposed as no other candidate contested for the post.

"The wrestler wanted a favour from the president that since he was from UP and also from his centre, he be allowed to compete but the president wants to root out age-related corruption from grassroots level, so he did not let him compete," news agency PTI quoted Tomar as saying.

"The federation is now very strict and determined to ensure that only right-aged wrestler compete in the age-group nationals. We actually disqualified 60 to 70 over-aged wrestlers from the competition and he was one of them.

"After when he started misbehaving with the president, he lost his cool and slapped him," Tomas added.

Interestingly, the wrestler trains at the academy which belongs to the WFI president in Gonda.