Lakra and Rohidas were given Rs 2.5 crore each, while Deep Grace Ekka and Namita Toppa were give Rs 50 Lakh each by CM Naveen Patnaik 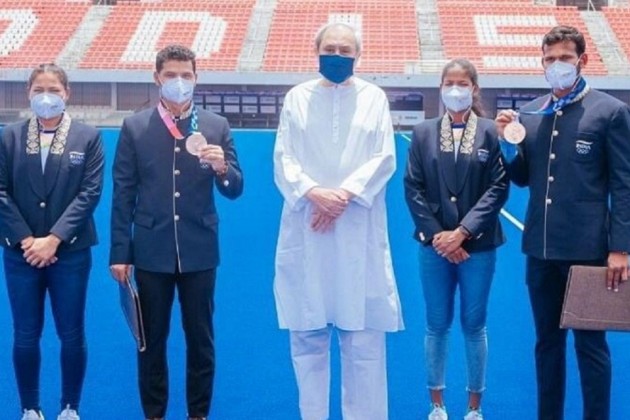 The felicitated players were given cash awards for their historic performances at the recently-concluded Tokyo Olympics.

While Birendra Lakra and Amit Rohidas were awarded Rs 2.5 crores each following the national men team's historic bronze-medal winning feat in Tokyo, Deep Grace Ekka and Namita Toppo were handed Rs 50 lakhs each after the women's side reached the semifinal stage for the first time in Olympics.

Patnaik also handed Lakra and Rohidas offer letters for appointment as Deputy Superintendent of Police in the State Police department during the felicitation program at the Kalinga Stadium in Bhubaneswar.

The chief minister lauded the performances of the two teams and advised them to continue their hard work and bring more laurels to the country.

The players expressed their gratitude with Lakra presenting the chief minister the Indian team jersey with signatures of all team members.

Ekka also presented the chief minister with the women's team jersey signed by all the team members.

ALSO READ: Neeraj Cynosure Of All Eyes As India Lays Out Red Carpet For Tokyo Heroes

The Indian men's team had defeated Germany 5-4 to win the bronze medal at the Tokyo Olympics, the country's first medal in the sport in 41 years.

The women's team, however, also to Great Britain in the bronze medal play-off.