Durant made his official bow for the Nets after sitting out the entire 2019-20 season, scoring 22 points in Tuesday's season-opening 125-99 blowout of former team the Warriors in Brooklyn 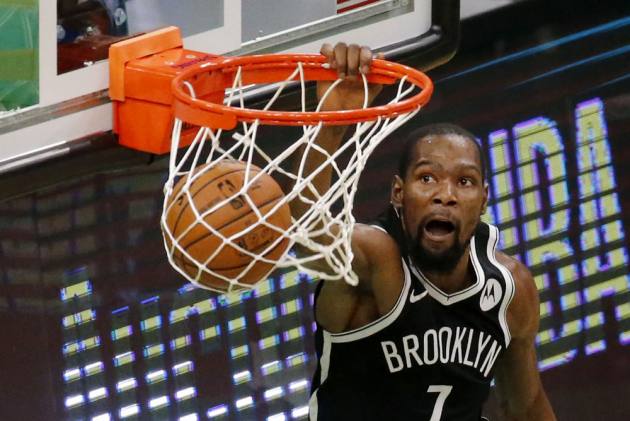 Durant made his official bow for the Nets after sitting out the entire 2019-20 season, scoring 22 points in Tuesday's season-opening 125-99 blowout of former team the Warriors in Brooklyn.

Former MVP Durant had not played a competitive game since rupturing his Achilles tendon while playing for the Warriors in Game 5 of the 2019 NBA Finals.

In his Warriors reunion, Durant – who won two championships and as many Finals MVPs in Golden State – was seven-of-16 from the field in 25 minutes, while he also collected five rebounds, tallied three assists and three steals.

Afterwards, Kerr said: "[His play] is kind of scary for the rest of the league. I couldn't tell one difference between seeing him 18 months ago to seeing him [now]."

Durant added: "I know it's a lot of emotions and a lot of things. I got so many calls and texts about playing again. For me, I was just, I've got to focus on the first possession, and then try and get through that and move on each possession.

"I try not to make too much of a deal out of this whole thing, and realise I've been playing this game since I was eight years old, so just got to revert back to what I know."

"I'm just learning my team-mates tendencies, where they like the ball, just their routines," Durant said. "Just getting to know my team-mates a little bit more. I think with each game as we continue to build we'll get more and more comfortable with each other.

"That's probably the thing I've learned the most, trying to learn each guy's favourite spot on the floor and what they like to do. So that's going to take some time to get everyone downloaded."

“This is the start of something new right here.”@KyrieIrving gives the game ball to Coach @SteveNash pic.twitter.com/lOQrmCKmXH

On Durant's display, Hall of Famer Nash said: "I think he has an eye for the long game. He realises there are a lot of steps still to be taken. I think he is just enjoying the process.

"He's really grateful to be back on the floor. He's missed it tremendously, the amount of love and passion he has for the sport. He's attacked his rehab that way...

Caris LeVert added 20 points – the only time in the last 30 years the Nets had three players score 20-plus points in 25 minutes or less in the same game.

@KyrieIrving led all scorers in the opener

After an injury-hit first season with the Nets, Irving – who won a title alongside LeBron James in Cleveland – told reporters: "As a young player you think that scoring a bunch of points and doing a bunch of things, getting individual accolades are great, and I definitely was going after those things.

"It's been a long journey to get here and to be able to master this craft, and to learn that it's not just about hero basketball, it's about how great the team is. I think I got caught up in that in my career a few times of just trying to play hero basketball where the team's success is really going to dictate how great you are as an individual and how great you play your role."