Bruno Fernandes was a worthy winner of the Premier League Player of the Month award for February. 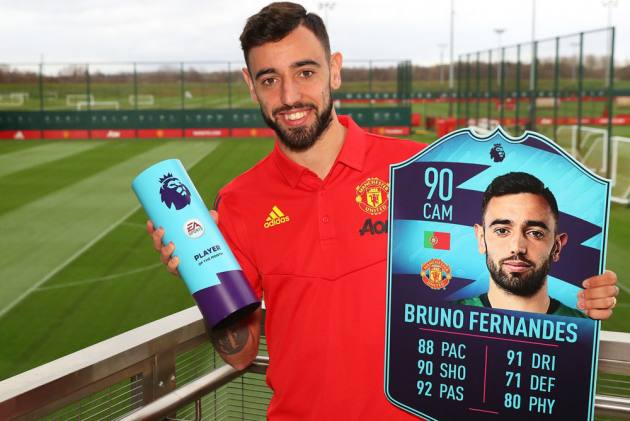 It might have taken a long time to be completed, but Manchester United's signing of Bruno Fernandes is beginning to look like one of this season's best pieces of business.

While the player himself insists he is not responsible for an upturn in form that has seen the Red Devils go 11 games unbeaten in all competitions, few can deny the impact he has made since joining in January for an initial fee of £46.5million (€55m).

In fact, his form saw him rewarded with the Premier League Player of the Month award for February, making him the first United player since Anthony Martial to win the prize for the month of his debut.

The 25-year-old is also the first Portuguese player to win the award since Chelsea midfielder Deco in August 2008.

2008 - Bruno Fernandes is the first Portuguese player to win the Premier League Player of the Month since Deco did so with Chelsea in August 2008. Art. pic.twitter.com/iqLmYtcJFv

3 - Indeed, no player has managed more Premier League assists since February 1 than Fernandes. Pepe, Roberto Firmino and Ross Barkley are the other players on three.

19 - Perhaps unsurprisingly, Fernandes is top of the charts for attempted shots since his debut. He has recorded 19, as many as Raul Jimenez and Jay Rodriguez and more than Calvert-Lewin and Salah (both 17).

20 - Fernandes is the 20th different United player to win a Premier League Player of the Month award. That tally is the joint-best in the competition, alongside Arsenal.