Bayern Munich were without nine players due to COVID-19 against Borussia Monchengladbach in Bundesliga. Two players were on national duty while Leon Goretzka and Josip Stanisic are down with injuries. 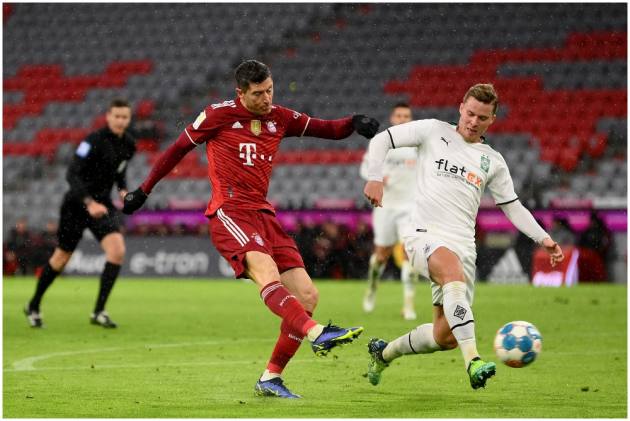 Bayern Munich lost at home to Borussia Monchengladbach 2-1 as the Bundesliga resumed despite coronavirus-induced absences on Friday. (More Football News)

The first game after the league’s winter break was in doubt due to a host of infections at both clubs with Bayern particularly hard hit. League authorities decided the club had enough strength in depth to play.

Robert Lewandowski got Bayern off to good start with his 20th league goal, but Gladbach answered with two goals in four minutes through Florian Neuhaus and Stefan Lainer and held on for the win. Gladbach also won their previous meeting — 5-0 in the German Cup in October.

The Bavarian powerhouse was without nine players due to infections — Manuel Neuer, Lucas Hernández, Kingsley Coman, Alphonso Davies, Leroy Sané, Dayot Upamecano, Corentin Tolisso, Omar Richards and Tanguy Nianzou – while Bouna Sarr and Eric-Maxim Choupo-Moting are away at the African Cup. Leon Goretzka and Josip StanišiÄÂÂ dropped out with injuries.

Bayern coach Julian Nagelsmann reacted by calling up six players from the club’s second team and two 16-year-olds in Arijon Ibrahimovic and Paul Wanner. The latter went on in the 75th minute to become Bayern’s youngest ever player in the Bundesliga at 16 years, 15 days. Jamal Musiala was the club’s previous youngest Bundesliga player at 17 years, 115 days.

Forward Malik Tillman made his first league start, while Joshua Kimmich returned after a two-month absence due to complications from his infection. “We had a lot of quality on the field,” said Müller, who rued too many mistakes and a “bitter” defeat.

Bayern showed no sign of missing any players as it began with intent amid snowfall. Lewandowski was involved from the start and duly scored with a fine strike inside the near post in the 18th minute. But the visitors equalized with their first foray in the 27th, Neuhaus meeting Kimmich’s attempted clearance with a dropkick past Sven Ulreich in the Bayern goal.

Lainer got Gladbach’s second with a header to Luca Netz’s corner four minutes later. Breel Embolo missed a good chance to make it 3-1, and Lewandowski struck the post from a narrow-angle after going past a defender at the other end. Matthias Ginter cleared Müller’s effort from the rebound.

Sommer denied Musiala after the break when, again, the home side made a better impression. Müller and Kimmich were next to go close, and Lewandowski struck the crossbar. It was as close as Bayern got to another.

“We were closer to the win,” Nagelsmann said. “We were stronger than the opponent and still we lost."