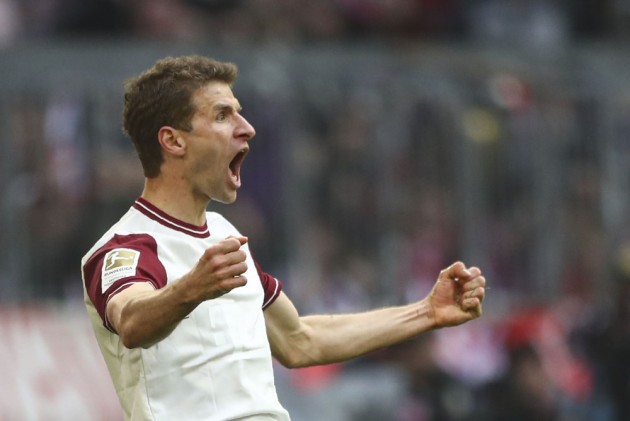 Thomas Muller scored an exquisite volley as Bayern Munich claimed a 2-0 win over Augsburg and moved four points clear at the top of the Bundesliga. (More Football News)

After a lacklustre first half at the Allianz Arena, midfielder Muller provided the game's decisive moment early in the second period with a beautifully controlled finish.

Augsburg had two late chances as Florian Niederlechner saw a close-range effort saved by Manuel Neuer before he put in the ball net shortly after only to see it chalked off for offside.

Bayern sealed the points in injury time when Leon Goretzka slipped the ball home after a neat interchange of passes with Serge Gnabry.

Borussia Dortmund's 2-1 win over Borussia Monchengladbach on Saturday lifted them up to second, only a point behind Bayern, in the Bundesliga table.

And here Bayern lacked urgency, creativity and quality in a lethargic first half, with Augsburg goalkeeper Andreas Luthe not having a meaningful save to make before the break as Bayern failed to register a shot on target.

Muller went closest for the home side on the stroke of half-time when he was picked out near the penalty spot by Gnabry's low cross, but he volleyed his effort into the ground and the ball sailed over the crossbar.

The 30-year-old midfielder made amends shortly after the interval, though, when he cushioned a volleyed finish from Jerome Boateng's ball over the top past Luthe and into the right corner of the net.

Bayern almost paid for missed chances in the second half as Augsburg twice went close after a spell of pressure late in the game.

Alfred Finnbogason's low cross found Niederlechner, only for Germany international Neuer to save superbly inside the six-yard box.

Niederlechner then broke clear of the Bayern defence and bundled the ball low into the net, but the assistant referee had flagged a marginal offside call.

Bayern put an undeserved gloss on the scoreline in injury time when their best passing move of the match culminated in Goretzka's deft finish past Luthe.

Bayern wore a special kit in the match to commemorate the club's recent 120th anniversary. It was based on the design of the outfit worn when they won their first league title in 1931-32. This was, though, a far from vintage performance from the German champions. Although they are unbeaten in all competitions since December 2019, they will be pushed all the way in the Bundesliga title race and will need to be better than this, especially on home turf.

Bayern had scored seven goals in two Bundesliga games since Robert Lewandowski was ruled out with a knee injury, but they missed his cutting edge against Augsburg. The experienced Muller stepped up to the plate with a goal of real quality.

In tight games such as these Bayern need their creative players to be prominent, but the majority fell flat, especially Philippe Coutinho. The Brazil playmaker was a peripheral figure and failed to make a real impact on the game.

Both sides are in Bundesliga action again next weekend, with Bayern away to mid-table Union Berlin on Saturday while Augsburg host Wolfsburg at the WWK Arena on the Sunday.