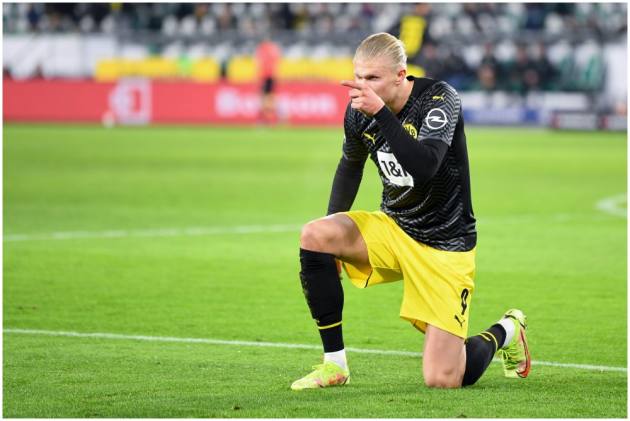 Erling Haaland scored on his return from injury for Borussia Dortmund to move atop the Bundesliga with a 3-1 win at Wolfsburg on Saturday. (More Football News)

Defending champion Bayern Munich can restore its previous one-point lead with a win over Arminia Bielefeld in the late match, a week before Borussia Dortmund hosts Bayern Munich for one of the league’s most anticipated games of the season.

Haaland hadn’t played in the Bundesliga since scoring twice in a 3-1 win at Mainz on October 16. He played three days later in Borussia Dortmund’s 4-0 loss at Ajax in the UEFA Champions League 2021-22, then dropped out with muscular problems.

Coach Marco Rose delighted Dortmund fans on Friday when he said Haaland may return sooner than originally thought and he followed through by bringing on the 21-year-old Norway forward in the 72nd minute in Wolfsburg.

Haaland promptly drew a save from Wolfsburg goalkeeper Pavao Pervan, then scored in the 81st with an acrobatic finish to Julian Brandt’s cross. It was Haaland’s 10th goal in his seventh Bundesliga appearance of the season.

Sebastian Andersson scored in injury time as Cologne beat Borussia Mönchengladbach 4-1 in their Rhine derby in front of 50,000 fans.

Augsburg substitute Michael Gregoritsch scored in the seventh minute of injury time to salvage a 1-1 draw at Hertha Berlin, a game that ended with a red card for Hertha coach Pál Dárdai’s assistant. It stretched Hertha’s winless run to four games.

Also, Hoffenheim routed last-place Greuther Fürth 6-3 away, and Bochum came from behind to beat visiting Freiburg 2-1.