In his 60 goals, Robert Lewandowski has scored 51 for Bayern Munich and nine for Poland. 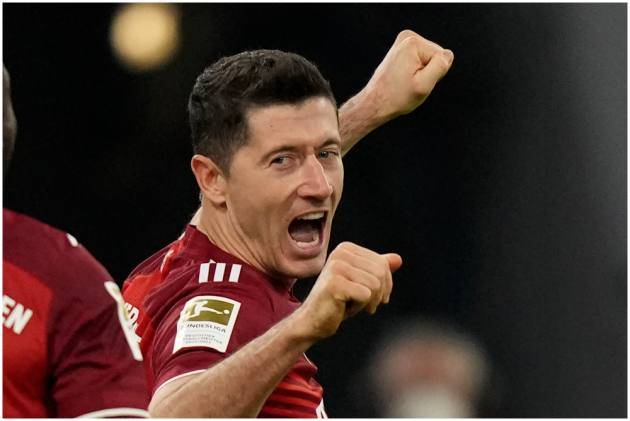 Lewandowski knocked the ball in from close range in the 76th minute after stretching to redirect Leroy Sané's attempted shot. Of his 60 goals in 2021, 51 have come for Bayern and nine for Poland.

Lewandowski had set a new single-season scoring record for the Bundesliga with 41 goals in 2020-21.

Leon Goretzka gave Bayern the lead in the 30th off a slick team passing move and could have scored more in the second half when he hit the post with one shot and clipped the crossbar with another.

Janik Haberer ensured a nervy finish when he scored for Freiburg in added time as Bayern conceded its 10th goal in four games in all competitions.

"I think it's a deserved win in the end," said Bayern coach Julian Nagelsmann, whose team opened up a four-point lead in the league.

"I think there were a lot of chances, just not quite as clear as in the last few games because Freiburg defended a bit more aggressively in the box than the other teams."

The deal with Qatar's state-owned airline and Bayern's regular training camps in Qatar have long caused friction with fans concerned over workers' rights in the 2022 World Cup host nation.

Christopher Nkunku scored one goal and set up as another as Leipzig beat second-place Borussia Dortmund 2-1 to ease the pressure on its American coach Jesse Marsch and indirectly benefit Bayern.

Leipzig piled on the pressure from the start and finally went ahead in the 29th when Nkunku picked up a long pass from Josko Gvardiol and rounded the goalkeeper to score.

Marco Reus leveled for Dortmund early in the second half but Leipzig hit back when Nkunku crossed for Yussuf Poulsen to tap in at the far post.

Leipzig rises three places to fifth with the win and is five games unbeaten in all competitions after a tricky start to the season following the departure of key players and the replacement of Nagelsmann with Marsch as coach.

A day after getting his first call-up to the German national team, striker Lukas Nmecha scored the only goal of the game in Wolfsburg's 1-0 win over Augsburg.

Nmecha headed in off Paulo Otavio's cross in the 14th to score in his third successive game in the Bundesliga and Champions League. That kept up new coach Florian Kohfeldt's winning start at Wolfsburg after a 2-0 win at Bayer Leverkusen last week and a 2-1 defeat of Salzburg in the Champions League.

Both goalkeepers tried to score goals as Bochum beat Hoffenheim 2-0, but neither made it work.

Bochum was already leading 1-0 from Soma Novothny's goal when it won a penalty and selected goalkeeper Manuel Riemann to take it, but he blasted the ball far off target.

Deep in stoppage time, Hoffenheim goalkeeper Oliver Baumann went up to the opposing penalty area for a corner, allowing Bochum's Miloš Pantovic to score into the empty net from inside his own half on the counterattack.

Relegation-threatened Arminia Bielefeld got its first league win of the season, beating Stuttgart 1-0 thanks to Japanese winger Masaya Okugawa's goal on the counter.