Manchester City stretched their club-record winning run to 13 matches as Gabriel Jesus and Raheem Sterling were on target at Turf Moor. 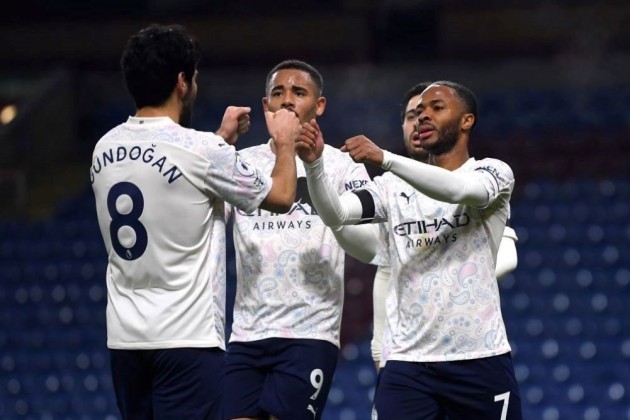 The Premier League leaders extended their club-record winning run to 13 matches across all competitions, with the result rarely appearing in doubt from the moment Jesus capitalised upon a third-minute error by Nick Pope.

Sterling claimed his 10th of the season seven minutes before the interval, after which point City's football continued to flow but the goals dried up.

Pep Guardiola's side are three points clear at the summit with a game in hand on Manchester United, with champions Liverpool next on their agenda this weekend.

Sterling darted inside from the left to play in Bernardo Silva, whose shot was poorly dealt with by Pope to leave Jesus with a simple leaded finish.

Pope looked to be in trouble again when he charged out of his area to confront Sterling in the 20th minute but the England goalkeeper managed to get a timely foot in.

City had to bide their time as Burnley grew into the contest but a wonderful link-up between Riyad Mahrez and Ilkay Gundogan allowed the latter to drill across goal for Sterling to convert from close range.

Joao Cancelo fired too close to Pope just before half-time and Burnley's number one sharply thwarted Sterling early in the second period as the visitors looked to conclusively end the argument.

Mahrez thought he had but was fractionally offside when he steered in Jesus' cross.

Burnley finally registered a shot in the 64th minute when Matej Vydra acrobatically volleyed over, but waves of slick City attacks continued to arrive.

Ederson decided to involve himself in the action by clattering through Erik Pieters and provide the strange spectacle of a goalkeeper getting booked for a foul on a left-back.

It was the closest City came to a scare.

What does it mean? City tuned up for Anfield examination

Guardiola's men are now unbeaten in 20 matches on all fronts in a season where hitting such a consistent vein of form has been beyond their main rivals.

If they can extent that run over the course of their next five Premier League games - Tottenham, Arsenal and West Ham follow the Liverpool encounter and precede a Manchester derby on March 6 - then a tight title race might turn into a procession.

When City drew 1-1 at Burnley in one of the few blots on their 100-point campaign of 2017-18, Guardiola was so irritated by a howling Sterling miss from point-blank range that he substituted the England forward.

Sterling has not quite eradicated such moments from his game, so there will have been relief when he finished from inside the six-yard box. All three of his attempts were on target, he created two other chances for team-mates and contested a game-high 15 duels.

154 - Raheem Sterling has been directly involved in 154 goals in all competitions under Pep Guardiola (99 goals & 55 assists) - eight more than any other player for Manchester City in this time. Flick. pic.twitter.com/Zq3x1jM3tm

Playing in central midfield against Manchester City in this mood can be a thankless task and it proved a tough slog for Jack Cork. The playmaker completed just 11 of his 17 passes and lost possession seven times.

Cork was substituted in the 71st minute having touched the ball 23 times. By comparison, Ederson - who did not have a single shot on target to deal with - made 39 touches.

- Burnley have failed to register a single shot on target in their last two Premier League games, the first side to do so in consecutive matches in the competition since Everton in January 2018.
- Gundogan has scored (7) or assisted (1) eight goals in his last 10 Premier League games for Man City, as many as in his previous 61 appearances combined.
- Sterling has been directly involved in 154 goals in all competitions under Guardiola (99 goals and 55 assists) - eight more than any other player for Manchester City in this time.
- Jesus has scored 68 goals in the 107 games he has started for Manchester City in all competitions, netting in each of his last three starts.
- City have kept a clean sheet in each of their last six Premier League games, their joint-longest run without conceding in the competition (also September 2015 and October 2018).

City face a potentially season-defining trip to Anfield on Sunday, where they have not won since 2003. Burnley are back at Turf Moor a day earlier to welcome Brighton.