Barcelona's miserable run away from Camp Nou continued as Cadiz claimed another big scalp in a 2-1 LaLiga win on Saturday. 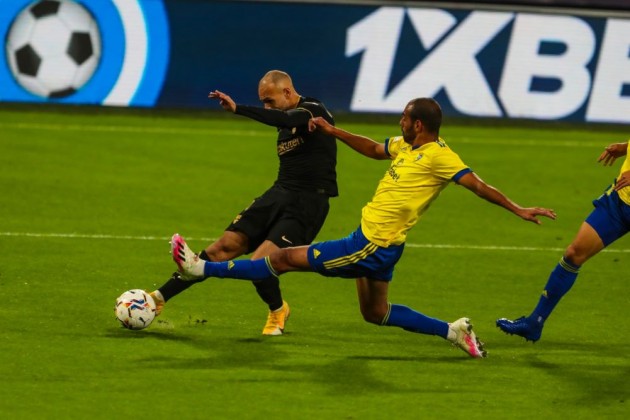 Barcelona's miserable away run continued as Cadiz claimed another big scalp with a 2-1 win on Saturday. (More Football News)

The Blaugrana are now winless in four on the road in LaLiga - their worst such run since May 2008 - and a dismal defensive mix-up gifted all three points to surprise package Cadiz.

Alvaro Gimenez struck a scrappy, contentious opener with just eight minutes played, but the promoted side, who enjoyed a stunning win away at Real Madrid earlier this season, were pegged back by Pedro Alcala's own goal before the hour mark.

Rather than protect their point, Cadiz rallied again and were rewarded when veteran substitute Alvaro Negredo seized possession from Marc-Andre ter Stegen to restore the home advantage 44 seconds after his introduction.

Barca had 82 per cent of possession but could not break down the spirited hosts, who moved fifth as Ronald Koeman's side fell 12 points off the pace set by Atletico Madrid.

Cadiz had peppered the Madrid goal early on in October to stun the champions, taking the lead with their seventh effort inside 16 minutes, but their sole first-half shot proved enough to be in front at the interval this time.

Oscar Mingueza went to ground in a tussle with Marcos Mauro from a corner and recovered only to direct a header towards his own goal, with Ter Stegen's save falling kindly for Gimenez to slam into the net from on the goal line.

Barca appealed in vain for a foul but responded strongly and Lionel Messi started to pull the strings. He set in motion a move that saw Philippe Coutinho fire over from an acute angle, before feeding Martin Braithwaite for a low shot that was diverted away by the boot of goalkeeper Jeremias Ledesma.

Mingueza and Coutinho were replaced at half-time, with Pedri and Ousmane Dembele introduced, but Barca still required a slice of fortune to draw level as Jordi Alba's low cross clipped Alcala - on in place of Mauro - and wrongfooted Ledesma at his near post.

The Blaugrana's hard work was quickly undone. Clement Lenglet failed to control a routine throw-in on the left and the ball instead ran for Ter Stegen, who Negredo charged down before evading Frenkie de Jong's despairing challenge to tap into the net.

Sergino Dest scuffed wide from a promising position as Barca again piled on the pressure, though Ivan Alejo and Bobby Adekanye each passed up late chances to increase the margin of victory.

What does it mean? No shifting Barca bother

This has been a testing year for Barcelona, but it was still assumed they would escape the mid-table muddle and return to a tussle at the top eventually. However, while they cannot win away from home, title talk is fanciful.

Frank Rijkaard was coach when Barca last endured such a miserable stretch on the road, then going six without a win, and they must improve in the coming weeks to avoid seeing that run extended further, their 21attempts here evidence more of territorial dominance than final-third creativity.

Too much left to Messi

Messi is Barca's talisman, but this was proof he cannot always win games on his own. The legendary number 10 had 10 shots - including a 20-yard stoppage-time free-kick - but could not find the net.

He was surrounded for much of the second period after Coutinho paid for a poor first half with an early withdrawal, allowing Cadiz to focus their defensive efforts on the sole remaining creator.

Cadiz spent much of the game on the back foot, but there was not a player in yellow who failed to play their part in this sublime success.

Ledesma made eight saves, Fali seven clearances, Yann Bodiger six interceptions, Isaac Carcelen five blocks and Alfonso Espino five tackles – all of which were game highs. Alberto Perea, who matched Espino's tally, also completed five of his six dribbles to relieve pressure, while Gimenez scored with his only shot and Negredo had an instant impact.

- Barcelona have earned 14 points in their opening ten league games, their lowest tally at this stage since the 1987-88 season (13, three points per win), the campaign prior to Johan Cruyff's arrival as coach.
- The last promoted team to win against both Madrid and Barcelona was Real Betis in 2001-02, and the last to do so in a first half of a league season was Elche in 1973-74.
- Barcelona lost with a 82.09 per cent possession, the second-highest amount for a losing team in a single LaLiga game since at least 2005-06 (Barcelona had 82.28 per cent possession when they lost 1-0 at Granada in April 2014).
- Cadiz and Xerez are the teams to have played the most LaLiga games versus Messi without conceding to the Argentina star (two games, zero goals).

Barca are already through in the Champions League but must fend off Juventus and Cristiano Ronaldo to clinch top spot in their group when the sides meet on Tuesday. Cadiz have nine days to enjoy this win before returning at Celta Vigo.