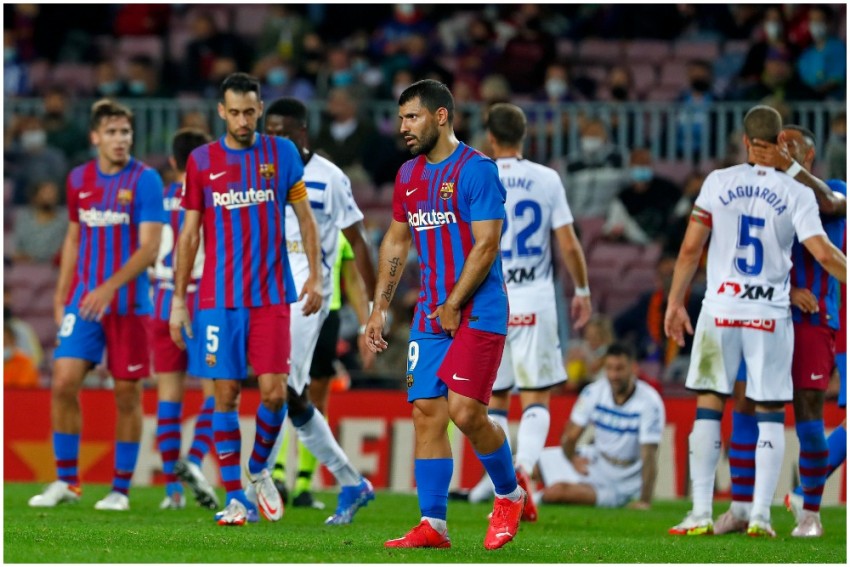 Barcelona’s problems continue to compound ahead of its Champions League match against Dynamo Kiev on November 3, with Gerard Piqué and Sergio Aguero not likely to make the trip to Ukraine because of health issues. (More Football News)

The club said that veteran defender Piqué has “a right calf strain” that will sideline him for “the foreseeable future,” while Aguero is expected to stay in a hospital to undergo further heart tests after leaving Saturday’s Spanish league match feeling dizzy.

Barcelona was held by relegation-threatened Alavés 1-1 on Saturday at home for its third consecutive setback following losses to promoted Rayo Vallecano and rival Real Madrid. The Catalan club is off to a dismal start to its first season without Lionel Messi in almost 20 years.

Coach Ronald Koeman was fired last week and the team was coached by interim manager Sergi Barjuán on Saturday.

Piqué left in the 70th minute with the score tied 1-1 at the Camp Nou Stadium. He scored the team’s winner in the 1-0 win over Dynamo at home two weeks ago, a result that restored Barcelona's chances of avoiding its first group-stage elimination in the Champions League in nearly two decades.

Aguero left before halftime and was taken to a hospital to undergo further tests, with Spanish media saying an arrhythmia was detected and he would remain hospitalized and under observation. Veteran Argentina forward hadn’t made his Barcelona debut until late October because of another injury.

Barcelona is third in Group E of the Champions League, one point behind second-place Benfica and six points behind leader Bayern Munich. The Catalan club is two points ahead of Dynamo after three matches.

Barcelona is ninth in the Spanish league with 16 points from 11 matches.