Hansi Flick admires how Chelsea play and says their head coach Frank Lampard has lots to offer, but Bayern Munich will show them no mercy 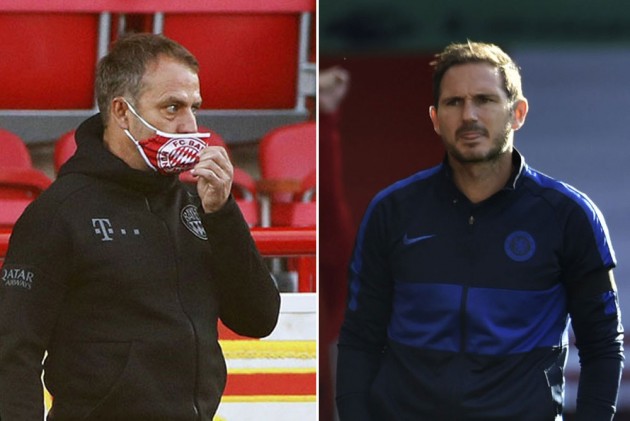 Hansi Flick has praised Frank Lampard's "extraordinary" impact at Chelsea - but the Bayern Munich boss plans to leave his opposite number dejected for a second successive Saturday. (More Football News)

Now they face the more daunting task of attempting to overturn a 3-0 first-leg deficit against Bayern in Munich, after the German giants scorched to a superb victory at Stamford Bridge in February.

It would appear a near formality for Bayern to complete their task, but Flick has typically prepared meticulously for the game and says his team will have no trouble in focusing.

He senses former England midfielder Lampard has the makings of a first-class head coach, so will take nothing for granted at the Allianz Arena.

"I can say Lampard has been doing an extraordinary job with Chelsea," Flick said.

"They've managed to qualify for next season's Champions League through the Premier League and they've been pretty successful after the restart.

"I like the way they play and how they've performed."

"If I was on the other side, I would think that we have nothing to lose and would throw everything at this game. That's exactly what we expect from Chelsea. "#FCBCFC#packmas #UCL pic.twitter.com/SxrqtJWPJa

Lampard could not sign players when he took over at Chelsea last July, as the club were under a transfer ban, which has led him to blood a host of young players this term.

By recently bringing in Timo Werner from RB Leipzig and Ajax's Hakim Ziyech, Chelsea have given an indication of their ambition for next season.

"It was a difficult situation when he started," Flick said. "But at the end of the season he really performed an extraordinary season with his team."

Bayern will be without the injured Kingsley Coman and Benjamin Pavard, with Joshua Kimmich expected to again fill in at right-back, with Ivan Perisic and Philippe Coutinho pushing for an attacking role.

Flick, whose team won the domestic double of the Bundesliga and DFB-Pokal, expects Chelsea to be positive and to believe they can turn the tie around, however unlikely that may be.

"If I would be in the position of the Chelsea manager or Chelsea fan, I would say we have nothing to lose, we will try to give all we have and we'll see," Flick said.

"We have respect for our opponents. We know Chelsea have a great and also big squad with lots of players who have fantastic potential.

"I know from my time with the DFB [German Football Federation] how football is played in England.

"If we look at the development that has been showing for years now, it is unbelievable, it is fantastic, how they bring up new, young players and focus on the youth.

"Chelsea have a great team filled with a lot of young players with great potential and we will be ready to face them tomorrow."