With the 5-0 win over Dynamo Kyiv, Bayern Munich scored three or more goals for the ninth game in succession across all competitions. 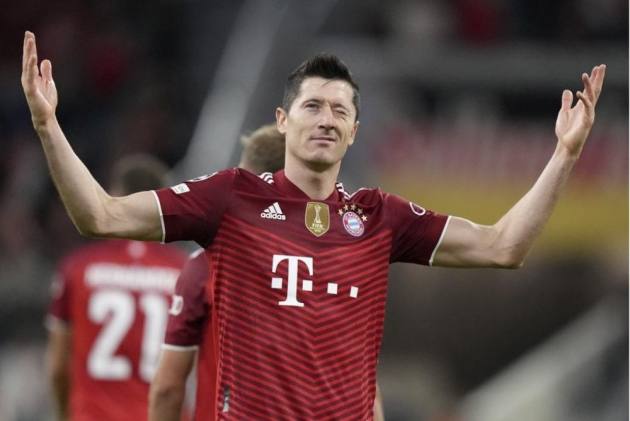 A 5-0 victory in the Champions League with two goals from Robert Lewandowski. Just another evening’s work for Bayern Munich. (More Football News)

The win Wednesday over Dynamo Kyiv marked the ninth game in succession that Bayern scored three or more goals across all competitions. Lewandowski has been crucial to the impressive attacking output under new coach Julian Nagelsmann, with 13 goals in nine games.

Bayern is already dominating Group E after just two games, following its opening 3-0 win over Barcelona in their opener. Next up are two games against Benfica, which beat Barcelona 3-0 in the group’s other game Wednesday.

Dynamo arrived in Munich with little apparent ambition other than damage limitation, but soon the Ukrainian team gifted Bayern the opening goal. Captain Serhiy Sydorchuk handballed in a challenge with Leon Goretzka, and Lewandowski stepped up to convert the 12th-minute penalty with a gentle shot past goalkeeper Heorhiy Bushchan.

Lewandowski followed up with Bayern’s second in the 27th when a gap opened up in the Dynamo defense and the Poland striker latched onto Thomas Müller’s pass to apply a simple finish for his 60th Champions League goal for Bayern.

He could have made it a hat trick — his first in the Champions League since November 2019 — but missed the target with a header soon after. Bayern has won the last 18 Champions League games in which Lewandowski has played.

Serge Gnabry made it 3-0 in the 68th with a powerful shot off the underside of the crossbar and Leroy Sané increased the lead to 4-0 when he shaped to hit a cross from the left but instead swung the ball in past Bushchan at the near post.

“No intent,” Sane told broadcaster DAZN. “I just wanted to send in a cross but I had a bit of luck.” The fifth was a towering header from Lewandowski’s substitute, Eric Maxim Choupo-Moting.

Nagelsmann said he was happiest that the team stayed “switched on” and didn’t concede a goal, although Manuel Neuer was called upon for a first-half save and to intercept a Dynamo counterattack late on when Bayern’s high pressing failed and the Ukrainian team broke in behind the defensive line.

It was Bayern’s first European home game with fans since December 2019 because of the coronavirus pandemic. Since then, Bayern won the 2019-20 Champions League at a tournament in neutral venues in Portugal and played all of last season’s home European games behind closed doors.