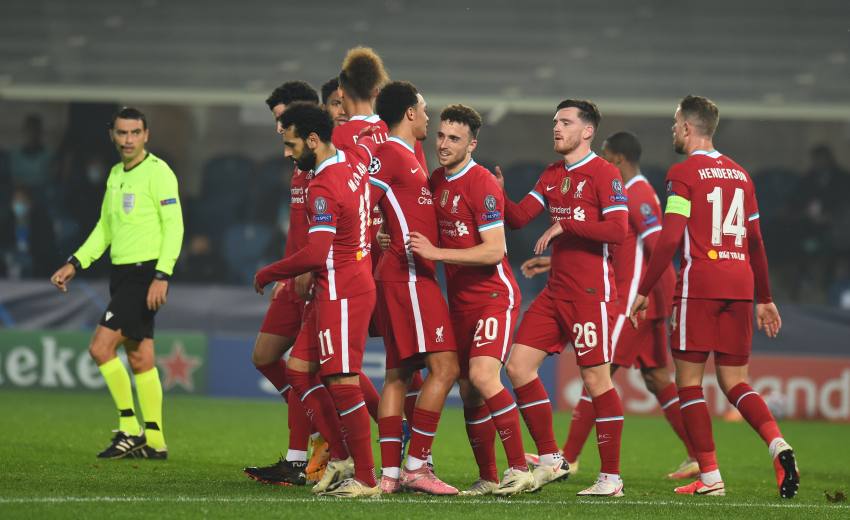 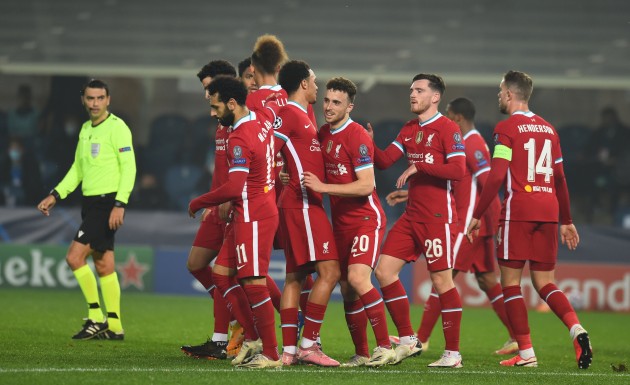 Rome: Jürgen Klopp has made no secret of his admiration for Atalanta's all-out attacking game.

Perhaps because it's similar to the way his Liverpool squad pours forward with speed and precision, often overwhelming its opponents.

In the first-ever meeting between the two teams, Klopp's side was the one doing the overwhelming in a 5-0 rout of last season's surprise quarterfinalist in the Champions League on Tuesday.

Portugal striker Diogo Jota scored a hattrick to take his tally to seven goals in 10 matches across all competitions since joining Liverpool in September.

Mohamed Salah and Sadio Mané also found the net for the 2019 champion, which strengthened its control of Group D with a full nine points. 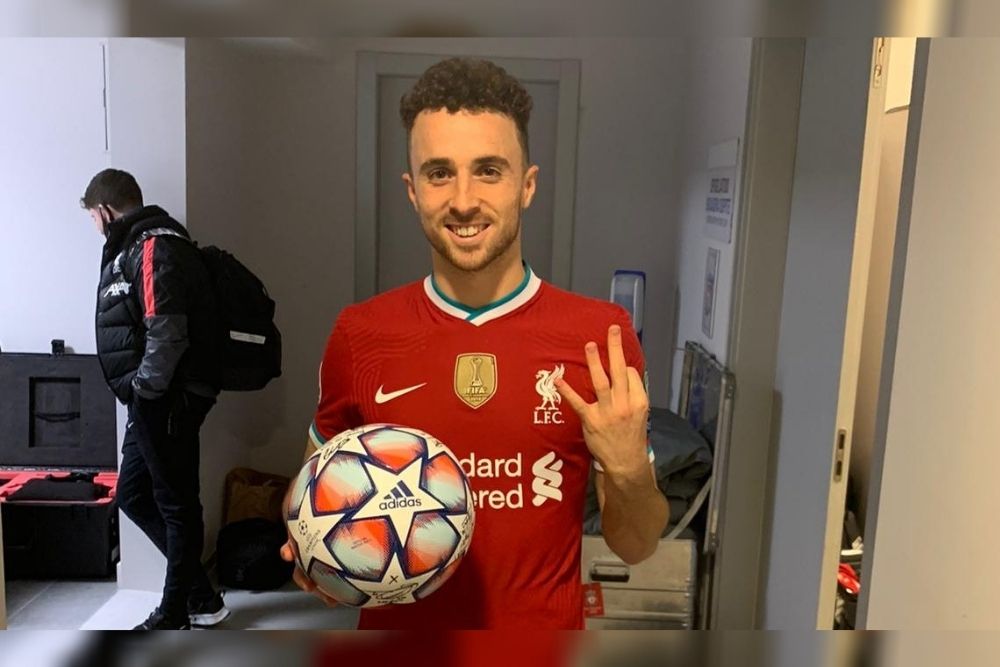 Portugal striker Diogo Jota has taken his tally to seven goals in 10 matches for Liverpool. (Twitter)

“I don't think any system could have defended tonight Sadio, Mo and Diogo, the way they played,” Klopp said.

Elsewhere on the third match day of the group stage, 13-time champion Real Madrid beat visiting Inter Milan 3-2 in Group B for its first win in this season's competition courtesy of a late goal from Rodrygo.

Defending champion Bayern Munich got late goals from Jérôme Boateng, Leroy Sané, Robert Lewandoski and Lucas Hernandez in a 6-2 win at Salzburg to preserve its perfect start in Group A.

Manchester City also stayed perfect with a 3-0 victory over Olympiakos in Group C with goals from Ferran Torres, Gabriel Jesus and João Cancelo.

In another rout, Borussia Mönchengladbach beat Shakhtar Donetsk 6-0 in Group B to match its biggest European Cup away win.

In all, there were 35 goals across the eight games — two shy of the record for one day.

Bayern Munich broke a deadlock with four late goals in its victory at Salzburg to extend its competition-record winning streak to 14 games.

Both teams observed a minute's silence for the victims of an attack in Vienna on Monday.

Watch all the goals from tonight's #UCL win in 80 seconds... because 60 seconds was never gonna cover it ðÂÂÂðÂÂ¥

In Moscow, Atlético opened the scoring with a header by José Maria Gimenez but Lokomotiv equalised with a penalty kick converted by Anton Miranchuk after video review determined there was a handball.

Bayern lead Group A with nine points, Atletico have four, Lokomotiv have two and Salzburg one.

Madrid captain Sergio Ramos scored his 100th goal across all competitions for the club — not bad for a center back.

The defender headed in to give Madrid a momentary 2-0 lead — his 55th goal scored by a header for his club.

Inter, which remained winless, could at least celebrate the night's most beautiful goal, which featured Nicolò Barella's flicked through ball to set up Lautaro Martinez's finish in one swift motion. 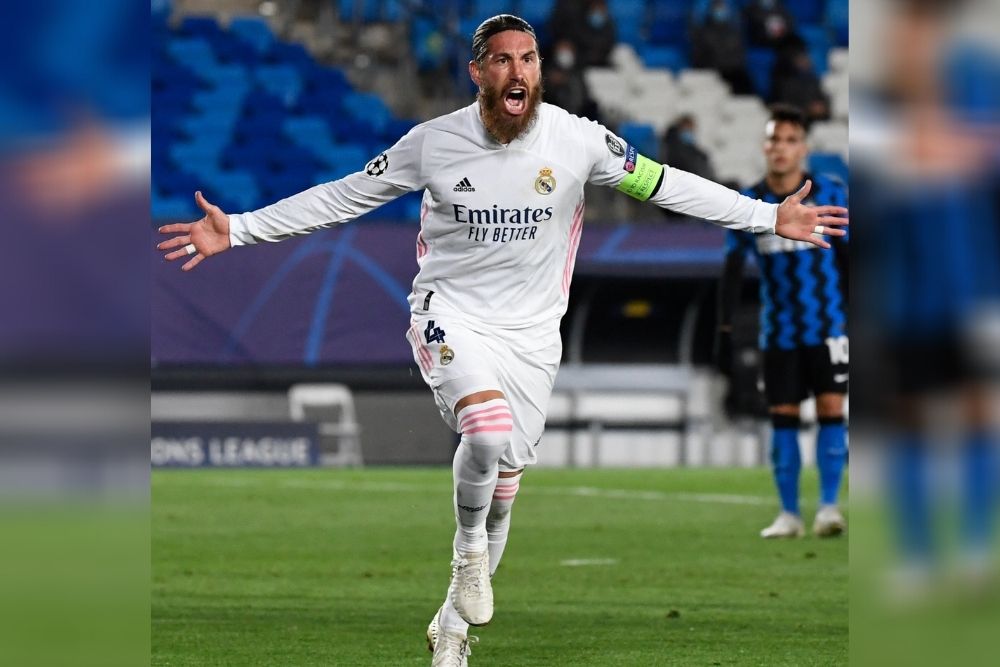 The home win moved Madrid out of last place in Group B. Borussia Mönchengladbach lead the group with five points after their rout of Shakhtar, one more than Madrid and Shakhtar.

Kevin De Bruyne set up two goals in City's win over Olympiakos. That gave the Belgium midfielder 14 assists in the competition since the start of the 2017-18 season, one short of Kylian Mbappe's competition-leading 15.

De Bruyne set City on its way by cushioning a pass through to Torres who took the ball on, had an extra touch, and drove a shot through the legs of the goalkeeper 12 minutes in.

De Bruyne, who also set up two goals in a 3-0 win at Marseille last week, then sent Jesus in toward the goal to virtually seal the game nine minutes from time.

City only require a draw in the return match in Greece after the international break to secure progress to the knockout stage with two group games to spare.

City lead Group C with nine points, Porto is next with six, Olympiakos have three and Marseille have none.

Dusan Tadic scored one goal and set up another to lead Ajax to its win over Midtjylland, a day after being seemingly ruled out of the game by his coach after a positive test for the coronavirus.

Tadic was one of a raft of senior players — including goalkeeper André Onana and midfielders Davy Klaassen and Ryan Gravenberch — not included in a reduced 17-man group that travelled to central Denmark on Monday because of the positive tests.

They did travel in a separate party that evening, though, and were allowed to play after supplying a negative test ahead of the match.

Tadic set up a goal for Antony after just 50 seconds with a neat touch and pass, then scored himself off an indirect free kick from the edge of the six-yard box in the 12th after Midtjylland goalkeeper Mikkel Andersen picked up a back-pass.

Anders Dreyer pulled one back for the Danish champions in the 18th minute.

Ajax moved into second place in Group D, above Atalanta on goal difference. They are five points behind Liverpool, with Midtjylland last with zero points.