Barcelona made it four wins out of four Champions League games with victory over Dynamo Kiev thanks to Martin Braithwaite's brace. 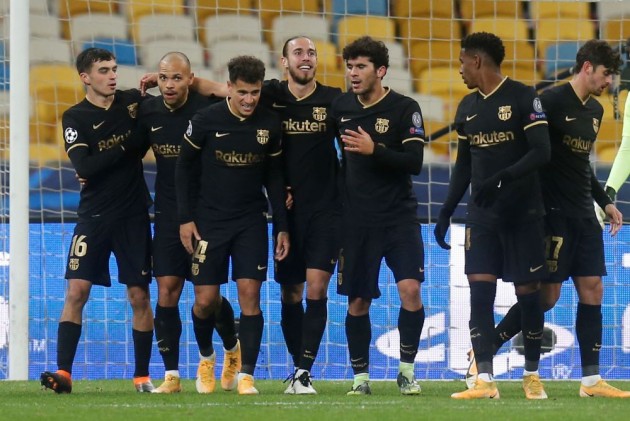 After an underwhelming first-half display, Ronald Koeman's side took the lead early in the second period with a fine finish from Sergino Dest.

Braithwaite netted his first goal in Europe for Barca with a close-range finish from a corner before he added his second of the game from the penalty spot.

Substitute Antoine Griezmann put the gloss on the win in injury time with a clinical finish from the inside the box as Barca booked a place in the last 16 for the 17th season in a row.

Barca completed the victory without Lionel Messi, who did not make the trip to Kiev after Koeman gave him a break following a hectic schedule.

Koeman rotated his squad as he gave first starts of the season to Carles Alena, Junior Firpo and Braithwaite, while Oscar Mingueza made his first-team debut.

The side named by the Dutchman had an average age of 24 years and 206 days, which was the club’s youngest in the Champions League since 2011 and their seventh youngest ever in the competition.

Philippe Coutinho curled a free-kick wide from distance but Francisco Trincao's dipping effort, easily gathered by Georgi Bushchan, was Barca's only shot on target during a drab first half.

Koeman's side increased the tempo after half-time and soon took the lead with a well-crafted goal which saw Braithwaite slide the ball through for Dest, who crisply angled a low finish into the net.

20a 21d- Sergiño Dest has scored vs Dynamo Kiev at the age of 20y 21d, the youngest defender for @FCBarcelona in #ChampionsLeague ever. Strenght#DynamoBarça #UCL pic.twitter.com/wYLl1P3Fid

Shortly before the hour-mark Barca added a second when Braithwaite stabbed home at the back post after Mingueza's deft flick from Alena's corner.

Braithwaite won a penalty after he was fouled by Denys Popov and the Denmark striker confidently stepped up to send the spot-kick high into the corner of the net.

Dynamo rarely threatened in the remainder of the contest while Riqui Puig missed a sitter for Barcelona late on when he fired over the crossbar.

Griezmann, a 66th-minute replacement for Coutinho, added a fourth in injury time when he swept the ball home.

What does it mean? Koeman's gamble pays off

A 1-0 defeat to Atletico Madrid in LaLiga on Saturday was hardly the tonic Koeman was looking for after the international break.

Defeat against Dynamo would have meant more scrutiny on Koeman, so it was a calculated gamble to put his faith in a relatively inexperienced starting line-up. On this occasion, however, it paid off and Barca are sitting top of Group G with maximum points. Now to transfer that form to LaLiga.

Braithwaite's opportunities in a Barcelona shirt are typically few and far between, but he proved his usefulness as a reliable backup with an impressive showing. He became the second Danish player to be involved in three goals in a single Champions League game (two goals and an assist) after Nicklas Bendtner for Arsenal in 2010 (three goals) since at least the 2003-04 season.

Karavaev give a stern test by Dest

This was a game that Dynamo full-back Oleksandr Karavaev will want to forget after he was given a torrid time by Trincao, and the overlapping runs of the superb Dest. Karavaev lost possession 15 times – the second worst in Dynamo's side – and was hauled off on the hour as he failed to make a single tackle.

- Barcelona have won in their first four games in the Champions League, having also done so in 2002-03 when they reached the quarter-final.

- Barca have reached the Last 16 of Champions League for 17th time in a row.

- Barca are unbeaten in their last 24 matches in the Champions League group stage (18W 6D), their best run in the competition.

- Martin Braithwaite was involved in three goals in this game (two goals, one assist). He had only been involved in one goal in his 17 previous games for Barca.

Koeman will hope for a return to winning ways in LaLiga when Barcelona welcome Osasuna to Camp Nou on Sunday while Dynamo host Vorskla in the Ukrainian Premier League a day earlier.