Pep Guardiola's Manchester City are already assured of a Champions League last-16 spot, but he wants a big performance against Marseille 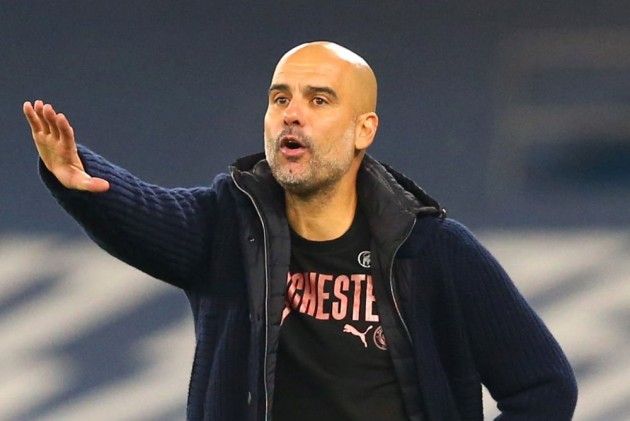 Pep Guardiola has vowed Manchester City's clash with Marseille will not be an opportunity for a breather ahead of the weekend's derby. (More Football News)

The City manager has made a point in recent weeks of stressing he will not rotate his squad, saying players will be picked on merit.

American goalkeeper Zack Steffen will make his Champions League debut against Marseille on Wednesday, an apparent indication the 25-year-old is pushing Ederson to start on a regular basis.

With the short trip to Manchester United ahead in the Premier League on Saturday, Guardiola wants his players drilled into a collective state of intense concentration.

"I don't rotate the team," Guardiola said. "I try to put the best players in the best condition for any game and decide the best for the team for this specific game.

"There is not one team for one competition and another for another one. In this tight schedule everybody has to be ready."

Guardiola was asked whether City may have a semblance of an advantage ahead of derby day, having already won their Champions League group while United face a tricky trip to RB Leipzig, knowing an off night could see them eliminated.

He said there was "absolutely nothing" of an advantage for City, and suggested United side's midweek commitments may even prove beneficial for Ole Gunnar Solskjaer's men.

"They will be focused today and when you are focused and the next game is a derby game you continue to be focused. I speak from my experience," Guardiola said.

years ago today, it was the first clutch of many from @sterling7

City will be tackling a Marseille side who halted a run of 13 Champions League defeats, an unwanted competition record, by beating Olympiacos last week.

The French outfit have a bleak record in England, however, having won just one of their previous 12 away games against English teams in Europe (D4 L7).

Marseille cannot go through to the last-16 stage this season, given that dismal run of losses, but Guardiola may still be wary given his record against French teams with City.

Since his arrival, City have lost three of their six Champions League games against French opposition (W2 D1), including the shock 3-1 loss to Lyon in last season's quarter-finals.

Marseille have strung together seven away defeats in succession in the competition, and an eighth would mean them enduring their worst losing run in the Champions League.

City could have Sergio Aguero involved in some capacity, but Guardiola is determined not to rush the Argentinian back.

"In the last three or four days he was part of the group and the training and the niggles he had in the recent past have disappeared."