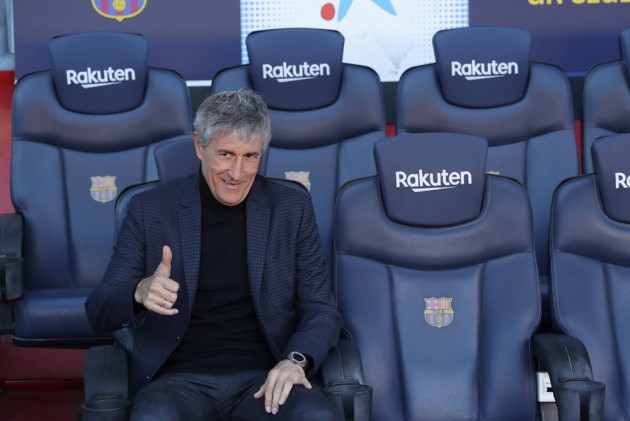 Friday's draw for the final stages of the Champions League handed Barca a tough-looking route to glory if they manage to successfully negotiate their Serie A opponents.

Bayern Munich are the likely quarter-final foes for the winner of that tie, as they hold a 3-0 first-leg advantage ahead of Chelsea's visit to the Allianz Arena.

READ: UCL Draw - Check Who Play Whom In Quarters

The winner of that game will take on whoever comes out of the Real Madrid or Manchester City v Lyon or Juventus clashes, meaning a semi-final Clasico in Lisbon is a possibility.

Speaking ahead of Saturday's trip to Real Valladolid in LaLiga, where victory is essential to preserve Barca's fading LaLiga title hopes, Setien was in no mood to be drawn on such permutations.

However, the decision to make Napoli travel to Camp Nou and not stage the concluding game of the tie at a neutral venue pleased him.

"I didn't have much in the way of expectations for the draw. I think it's important that we focus on the game against Napoli, which is the key," he said.

"We know that we're going to be playing at home now, which is something that I think is fair.

"As for the rest of the draw, it's okay to know what it is and it's good to analyse some of the possible opponents.

"But the first thing we have to do is focus on the work for the game tomorrow against Valladolid. We need to take three points. Then the game against Napoli is vital for us. When the moment comes we will face that.

"First we need to keep our option open for winning the title."

@QSetien reacts to the @ChampionsLeague draw ...

Junior Firpo is back in the Barca squad to face Valladolid but Arthur is an injury absentee.

The Brazil midfielder has not featured for the Blaugrana since his pending switch to Juventus was confirmed but Setien insisted his omission is purely because he is not fit.

"It is a specific issue," he said. "His involvement is the same. He tries to give his best in each training session.

"Next week he will overcome this process he has and will return to action. We are going to need everyone."

Setien is set to have another boost to his midfield options after Frenkie de Jong returned to training from a calf problem.

"We considered taking him on the trip [to Valladolid] but we have thought the best thing is [to wait until] he has really good feelings.

"We preferred not to take risks and wait a few more days for the sensations to be excellent."

If Real Madrid beat Deportivo Alaves on Friday, Barca will take to the field four points in arrears, with an inferior head-to-head record and three games remaining for both sides.

Nevertheless, Setien is not ready to give up just yet.

"Everything can happen in football," he added. "We have seen inexplicable things.

"We must focus on what is ours and wait for that opportunity that the rival in front of us may fail."