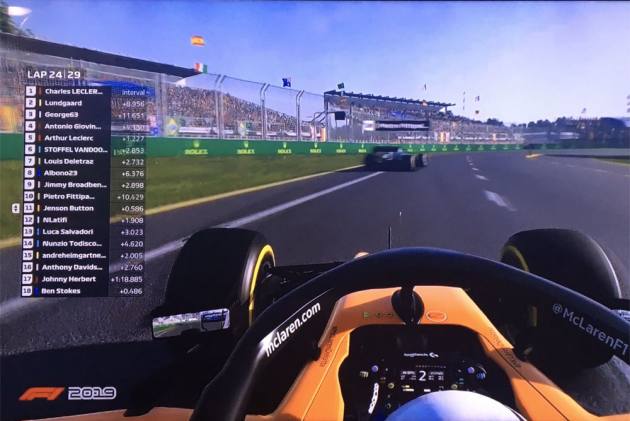 Three weeks after he had hoped to be starring in Formula One's Australian Grand Prix, Charles Leclerc saw the chequered flag confirm a virtual victory in Melbourne.

In the second event of F1's Virtual Grand Prix Series - an Esports tournament filling the gap while the real thing is suspended due to the coronavirus pandemic - FDA Hublot Esports driver Leclerc delivered a dominant performance.

Leclerc, who won back-to-back races in Belgium and Italy during his debut season with Ferrari in 2019, was on pole and never looked troubled around Albert Park, winning after 29 laps.

Renault's Christian Lundgaard was second, with Williams' George Russell finishing third, denying Arthur Leclerc a place on the podium alongside his brother.

"We are sitting on a chair so there's not even the g-force we have in a real car.

"But I'm sweating like crazy. The muscles are not hurting but [with] the concentration and everything I've been sweating a lot."

Having seen singer Liam Payne, once of One Direction, struggle during the first race of the series, an early crash left England all-rounder Ben Stokes playing catch-up.

Stokes would finish 18th out of 18 drivers, one spot behind three-time F1 race winner Johnny Herbert.

It’s the taking part that counts....it’s what I always tell my kids

"It's the taking part that counts...it's what I always tell my kids," Stokes wrote on Twitter.

Former F1 world champion Jenson Button finished 12th and had a better time of it than Lando Norris, who was unable to take his place on the grid due to technical difficulties.

Upon learning of Norris' struggles, Red Bull's Verstappen replied: "Yeah, I will never join that."