LaMelo Ball, 19, is reportedly set to miss the rest of the NBA season 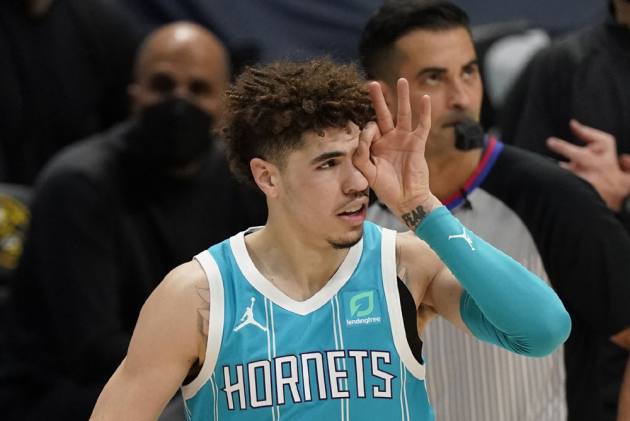 Charlotte Hornets star and NBA Rookie of the Year favourite LaMelo Ball will spend an indefinite spell on the sidelines after fracturing his right wrist. (More Sports News)

Ball is reportedly set to miss the remainder of his first season in the league following an MRI scan on Sunday, which revealed a fractured bone.

The 19-year-old rookie sensation will be further evaluated after hurting his wrist in Saturday's 125-98 loss to the Los Angeles Clippers.

Ball has taken the NBA by storm since being drafted by the Hornets with the third pick last year.

UPDATE: LaMelo Ball has suffered a fractured bone in his right wrist. Ball, who will be further evaluated, will be listed as out indefinitely.

Among rookie leaders, Ball ranks first in assists and steals, second in scoring and is tied for second in rebounds.

Ball is the only player over the last 60 years to lead all rookies in total points, rebounds, assists and steals at the All-Star Break.

Last month, Ball joined Stephen Curry (2010) and Jason Kidd (1995) as the only rookies with seven-plus threes and 10-plus assists in a game and is the youngest to do so.

Ball also became the youngest player in NBA history to record a triple-double in January.