Chelsea 0-2 Liverpool: Sadio Mane At The Double As Kepa Arrizabalaga Makes Another Howler

Kepa Arrizabalaga's error helped Liverpool claim a 2-0 victory over Chelsea, with Sadio Mane at the double at Stamford Bridge 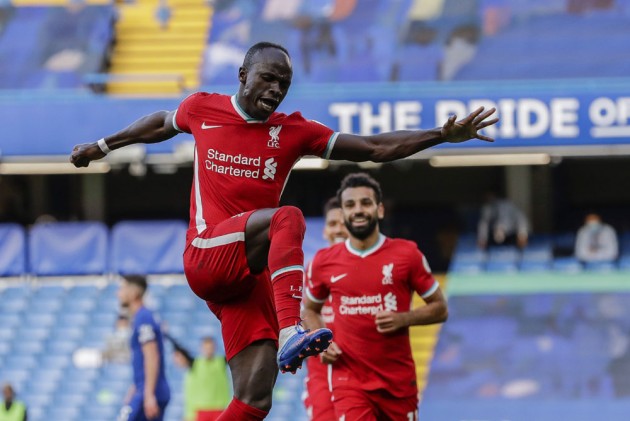 Sadio Mane scored twice as Kepa Arrizabalaga made another calamitous error in a 2-0 victory for Liverpool over 10-man Chelsea, with Thiago Alcantara conceding a penalty on his debut. (More Football News)

Frank Lampard's side hardly laid a glove on the Premier League champions at Stamford Bridge and their cause was not helped by Andreas Christensen's red card late in the first half, with Mane then scoring twice in the space of four minutes after the restart.

Mane's second was a gift from the much-maligned Kepa, whose days as Chelsea's first choice seem numbered with Rennes goalkeeper Edouard Mendy supposedly close to joining.

Thiago – who came on as a half-time substitute following his £20million move from Bayern Munich – marked his Liverpool debut by fouling Timo Werner to give away a penalty, but Alisson saved Jorginho's spot-kick to cap a miserable day for Chelsea.

1 - Jorginho has missed a penalty for the first time in nine attempts for Chelsea in all competitions, while this was Alisson's first penalty save for Liverpool since joining the club (three faced). Reach. pic.twitter.com/lgo1uhSyqf

Kepa needed Christensen to block Roberto Firmino's goal-bound flick after the goalkeeper left his line and was beaten to a loose ball by Mohamed Salah in the 13th minute.

Momentum swung in Liverpool's favour on the cusp of half-time when Christensen brought down Mane and was sent off by referee Paul Tierney, who changed his initial decision to book the defender after a VAR review.

With new arrival Thiago thrown into the fray due to a reported thigh problem for Jordan Henderson, it took just five minutes for the Reds to make their numerical advantage count – Salah and Firmino combining to set up Mane, who headed in from six yards.

While Liverpool's quality crafted their opener, their second was handed to them as Kepa's pass was intercepted by Mane and he fired home.

Thiago's clumsy tackle on Werner handed Chelsea a lifeline, but it was one Jorginho failed to take with his tame penalty easily saved by Alisson.

Kepa went a small way to making amends for his mistake late on, pulling off two saves in swift succession from Mane and Salah to keep Liverpool's winning margin down to two.

What does it mean? Big-spending Blues no match

Much was made of Chelsea's transfer spend of approximately £200m heading into this season, but on Sunday's evidence Lampard's men are far off mounting a title tilt.

All 11 Chelsea starters had average positions inside their own half throughout the encounter, and they managed just three shots on target, including Jorginho's failed spot-kick.

Mane off the mark

Salah was the star for Liverpool in their victory over Leeds United last week, but it was Mane who took centre stage this time. The Senegal forward is only the third Liverpool player to score a Premier League brace at Stamford Bridge, after Steve McManaman in December 1995 and Philippe Coutinho in October 2015.

Thiago Silva's introduction cannot come quickly enough for Chelsea. Christensen's mistake handed Liverpool the impetus, as he became the first player since his boss Lampard – back in 2009 – to be sent off in a league fixture between the sides. He was also the first Blues player to see red at Stamford Bridge since David Luiz in 2017.

Liverpool visit Lincoln City in the EFL Cup on Thursday, while Chelsea are in action against Barnsley a day prior.