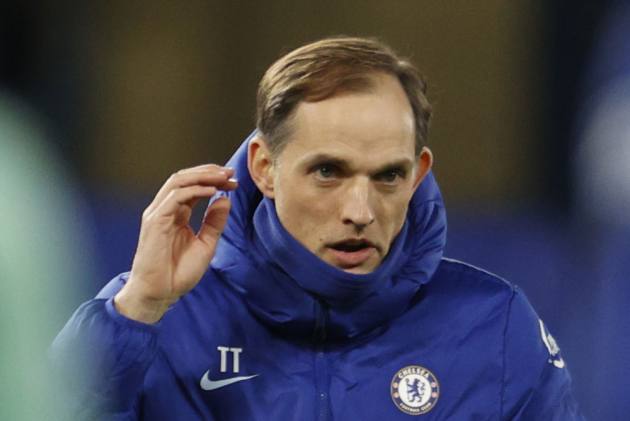 Thomas Tuchel's impressive start to life as Chelsea head coach continued with a 2-0 win over Everton at Stamford Bridge on Monday.

The German has now overseen an unbeaten stretch of 11 games since taking over from Frank Lampard on January 26, with this result the Blues' eighth win in that period.

Ben Godfrey's first-half own goal put the hosts ahead before Jorginho's penalty after the break ensured Everton's winless run at Chelsea would stretch to 26 Premier League games.

Chelsea remain in fourth but move back to within three points of third-placed Leicester City - winners against Brighton and Hove Albion this weekend - while the Toffees are now four points further back in fifth.

The closest either side came in the opening half-hour was a Jorginho effort from outside the penalty area that flashed past Jordan Pickford's right-hand post.

The hosts did open the scoring after 31 minutes, though, when Kai Havertz's volley from Marcos Alonso's cross was diverted past Pickford by the unfortunate Godfrey.

Pickford was called into action shortly before the interval, saving from Alonso, who went close with a free-kick following the restart.

Havertz had a strike ruled out after he handled the ball before firing past Pickford, but Richarlison squandered a golden opportunity to pull Everton level when he skewed wide after being released by Gylfi Sigurdsson.

Chelsea wrapped up maximum points after 65 minutes, Jorginho stroking home from the spot after Pickford had brought down Havertz inside the area.

Superb goalkeeping from Pickford in the closing stages at least prevented Chelsea adding further gloss to the scoreline, the England number one twice keeping out Timo Werner as well as denying N'Golo Kante and Mason Mount.

What does it mean? Tuchel continues to justify Chelsea decision

Lampard's dismissal raised eyebrows, but there can be few arguments now against the Chelsea hierarchy's decision to bring in Tuchel.

This latest triumph means he is the first manager in Premier League history to steer his side to clean sheets in each of his first five home games in charge in the competition. That run also marks the first time Chelsea have kept five consecutive clean sheets at Stamford Bridge since January 2015.

Havertz has largely struggled since his big-money move from Bayer Leverkusen ahead of the season, but he provided a tantalising glimpse of his quality here.

The Germany international's strike - one of two he had in the game - led to the opening goal, while he drew the foul from Pickford that led to the second.

Get in! Havertz connects with an Alonso cross, and finishes via a big deflection! #CHEEVE https://t.co/3sx5nTSPMt pic.twitter.com/s4xcTdZuJk

Alex Iwobi endured a sorry outing and it was little surprise to see him hauled off after 56 minutes for Tom Davies. The former Arsenal man was badly caught out for Chelsea's opener, while he won just one of the five duels he contested.

- Chelsea are unbeaten in their past 26 Premier League home games against Everton (W15 D11). Only against Tottenham have the Blues had a longer unbeaten home run in top-flight history (27 between 1990 and 2016).
- Only against Leeds United (35 between 1946 and 2001) have Everton had a longer winless away run in the top flight than they have at Chelsea, their last victory a 1-0 win in November 1994.
- Only Maurizio Sarri (12 with Chelsea in 2018-19) and Frank Clark (11 with Nottingham Forest in 1994-95) have begun their Premier League managerial careers with a longer unbeaten run than Chelsea's Tuchel (now P9 W6 D3).
- Everton have scored 53 own goals in the Premier League, seven more than any other side in the competition's history.
- Only Liverpool's James Milner in 2016-17 (seven of seven) has scored more goals in a single Premier League season with all of them coming from the penalty spot than Chelsea's Jorginho this term (six of six).

Both sides are in Premier League action on Saturday, with Chelsea travelling to Leeds and Everton hosting Burnley.