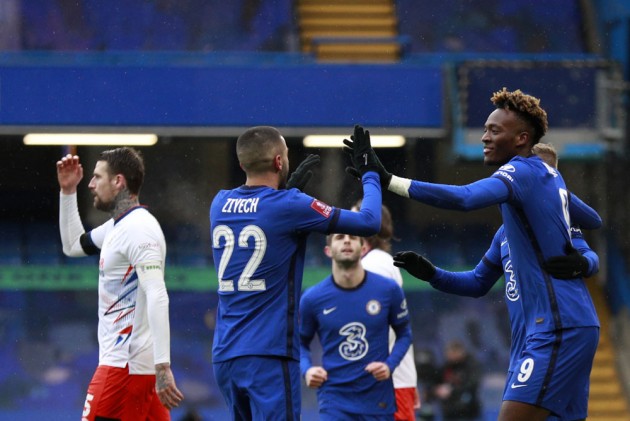 Kepa Arrizabalaga made another blunder and Timo Werner missed a penalty but Tammy Abraham's hat-trick got Chelsea past Luton Town with a 3-1 victory at Stamford Bridge. (More Football News)

Abraham's quickfire double put Chelsea in control early in the FA Cup fourth-round tie on Sunday, as last season's runners up seemed to be heading for a comfortable success.

Yet Kepa, brought in as one of seven changes made by Frank Lampard from Tuesday's defeat at Leicester City, enabled Luton to haul themselves into the contest when he failed to keep out Jordan Clark's effort.

Abraham's third goal 16 minutes from time ultimately set up a fifth-round trip to Barnsley, though Werner's woeful run in front of goal continued when his late spot-kick was saved.

3 - Tammy Abraham is the first player to score an FA Cup hat-trick for Chelsea since Oscar v MK Dons in January 2016, and first Englishman to do so since now-manager Frank Lampard v Macclesfield in January 2007. Magic. pic.twitter.com/yDQBScEQRW

Chelsea beat Luton 2-0 in their previous meeting in 1994 – the year they made their first FA Cup final appearance since 1970 – and the Blues were ahead by that scoreline inside the first 17 minutes.

Abraham got them both, the striker sweeping in from Werner's deflected cross before he met a right-wing Reece James delivery to head home his second.

Luton's record signing Simon Sluga denied Christian Pulisic in the 28th minute but at the other end, Kepa – the world's most expensive goalkeeper – did little to dispel doubts over his quality when he allowed Clark's strike to slip underneath him.

Pulisic's personal battle with Sluga continued after the break, with Luton's goalkeeper again coming out on top as he blocked the forward's close-range effort.

Harry Cornick would have drawn Luton level were it not for Kepa's reactions, the Spain international pulling off a fine stop at his near post.

Abraham spurned one glorious chance to seal his hat-trick but had it just 82 seconds later, tapping in from Callum Hudson-Odoi's cutback.

Werner had the opportunity to help himself to a much-needed goal after being brought down inside the box by Clark, only for Sluga to deny Chelsea's out-of-form striker in the 86th minute.

What does it mean? A reprieve for Lampard

Chelsea just cannot string a run of wins or quality performances together in the Premier League, but at least they can hope to put together a cup run.

The Blues have now progressed from 52 of their past 54 FA Cup ties against sides from a lower division, though one of the teams they lost to in that run – Barnsley in 2008 – are their opponents in the next round.

Abraham back on track

Abraham managed a game-high six attempts on goal and really should have had his hat-trick when he headed Hudson-Odoi's cross wide – though the pair linked up again to superb effect a minute later.

The 23-year-old had not scored since Boxing Day but is the first player to score an FA Cup hat-trick for Chelsea since Oscar in January 2016, and first Englishman to do so since Lampard in January 2007.

While Kepa's miserable streak of errors continued – after letting in Luton's goal, the former Athletic Bilbao goalkeeper's save percentage of 58.8 per cent was the lowest of any Premier League goalkeeper with at least 20 appearances since the start of last season – Chelsea have another big-money signing in similarly troublesome form at the other end.

Werner scored in the last round against Morecambe but has gone 11 league games without a goal and his tame penalty rather summed up yet another frustrating display for the ex-RB Leipzig star.

- Chelsea have reached the fifth round of the FA Cup in 21 of the past 23 seasons, failing only in 2010-11 and 2014-15.
- Since Roman Abramovich took over Chelsea in 2003, the Blues have won more FA Cup games than any other club (65).
- Abraham scored the third hat-trick of his professional career in all competitions, with each coming in a different competition (Championship v Nottingham Forest in 2018, Premier League v Wolves in 2019, FA Cup v Luton on Sunday).

Chelsea are back in Premier League action against Wolves on Wednesday, with Luton taking on Blackburn Rovers in the Championship on Saturday.