Chelsea kept pace at the top of the Premier League as they came from behind to beat Southampton 4-1 at Stamford Bridge. 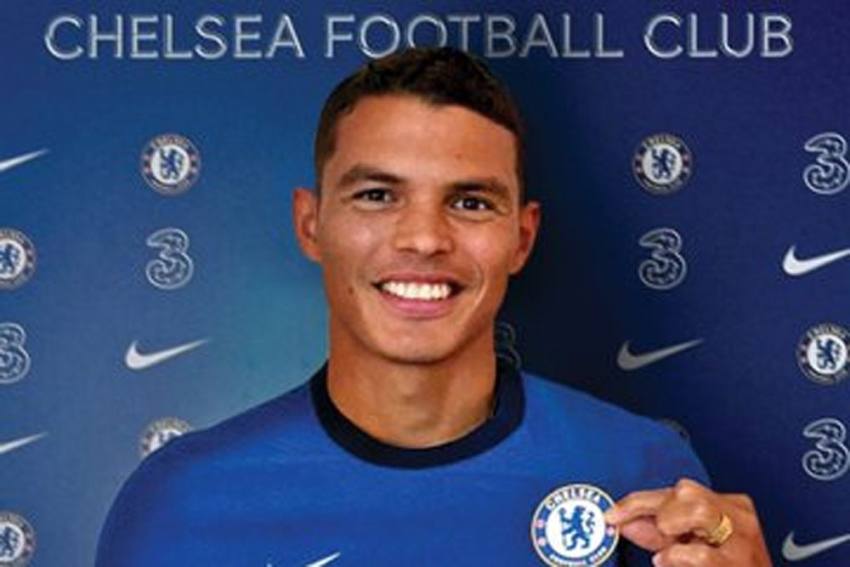 Thiago Silva's first goal for Chelsea made sure that they kept pace at the top of the Premier League.
Twitter (@ChelseaFC)
Omnisport 2020-11-08T13:38:36+05:30 Chelsea 4-1 Sheffield United: Comeback Sees Blues Keep Pace At Top Of Premier League

Chelsea kept pace at the top of the Premier League as they came from behind to beat Sheffield United 4-1 at Stamford Bridge.

The Blues had kept clean sheets in each of their last five matches, but saw their goal breached in the ninth minute by David McGoldrick.

However, Tammy Abraham equalised and Ben Chilwell gave Chelsea a lead they would not relinquish as their defensive solidity returned thereafter.

Thiago Silva's first goal for Chelsea made sure of the victory before Timo Werner made the margin of triumph even more comfortable.

The win means Frank Lampard's men are a point behind leaders Southampton and second-placed Liverpool, who have a game in hand. The winless Blades are bottom with one point from eight games.

6 & 2 - No player has created more chances in a Premier League game this season than Hakim Ziyech did this evening against Sheffield United (6 chances created & 2 assists). Superb. pic.twitter.com/8raugCIYS2

Chelsea went close to breaking the deadlock in the fourth minute when Chilwell was denied by Aaron Ramsdale at the far post following good work from Abraham.

Five minutes later the hosts were unexpectedly behind, George Baldock and Sander Berge combining excellently from a short corner to tee up David McGoldrick to convert with a stylish flick.

McGoldrick's goal was the first Chelsea have conceded in all competitions for 459 minutes, but they did not need too long to respond, Hakim Ziyech releasing Mateo Kovacic down the right to pull back for Abraham to level matters with a measured finish.

Werner then rattled the underside of the crossbar just after the half-hour mark following a Kovacic free-kick and the turnaround was completed when Chilwell converted at the far post after Ramsdale misjudged Ziyech's excellent cross.

Kovacic shot narrowly wide as Chelsea looked to kill the game off, an aim they achieved when Silva was left unmarked to head home Ziyech's right-wing free-kick.

Werner was just off target with a lofted finish moments later but he made no mistake after a loose ball squirmed into his path in the 80th minute, emphatically applying the final gloss to the scoreline.

What does it mean? Defence breached but Chelsea convincing

Lampard may have been disappointed to see his defence undone by a short corner, but he will have been thrilled with the reply.

The Blues had 20 total shots, including nine on target, and completed 754 total passes to the visitors' 307.

Chelsea were in command once they equalised and could have won by an even greater margin.

Crucial to Chelsea's dominance was Ziyech, who continues to prove his worth after joining from Ajax.

He had a hand in three goals, playing a game-high six key passes and supplying two assists.

The Blades never looked like preventing Chelsea from easing to victory once their lead was erased.

Chris Wilder's men had only one shot in the second half and appear set for a difficult fight against relegation - they have the joint-lowest points tally a team has recorded at this stage of a Premier League campaign.

- Chelsea (11 games without defeat) are enjoying their longest unbeaten run in all competitions since November 2018 (a run of 18).
- Meanwhile, Sheffield United's 12-game winless run is the longest they have gone without a victory in all competitions since October 2013 (a run of 13).
- McGoldrick's opener was just the second goal Edouard Mendy has conceded for Chelsea in all competitions and first since his debut against Tottenham, having kept six consecutive clean sheets prior to this game.
- Chilwell has been directly involved in four goals in his three Premier League home games for Chelsea (2 goals, 2 assists), as many as his 52 home appearances for Leicester in the competition.
- Only Glenn Hoddle (36y 150d) scored his first goal in the Premier League for the Blues at an older age than Thiago Silva (36y 46d).
- After failing to score or assist a goal in any of his first four top-flight appearances, Werner has been involved in five goals in his last four games in the competition (4 goals, 1 assist).

Chelsea will visit Newcastle United on November 21 after the international break. Wilder's side will look for their first win when they host West Ham a day later.