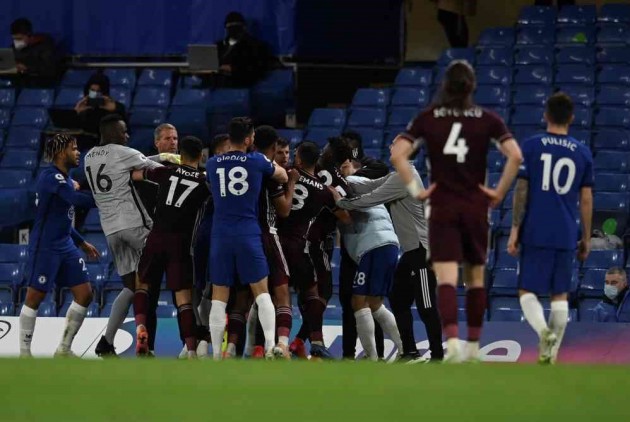 Chelsea and Leicester City have been charged by the Football Association (FA) following a scuffle between both sets of players during the closing stages of Tuesday's Premier League match. (More Football News)

Tempers flared in added time at Stamford Bridge after Ricardo Pereira caught former team-mate Ben Chilwell with a bad challenge near the touchline, sparking a melee that also involved some members of the coaching staff.

Three Leicester players – Ricardo, Nampalys Mendy and substitute Daniel Amartey – were booked by referee Mike Dean for their part in the incident, which came three days on from Leicester's 1-0 win against Chelsea in the FA Cup final.

Amartey was at the centre of controversy following that triumph at Wembley after footage emerged of the midfielder – again an unused substitute – throwing a Chelsea pennant to the ground.

"We're disappointed, of course. We wanted to win. Unfortunately, we couldn't... But we still have a game to go and we'll do our best."@RicBPereira speaks to LCFC TV following tonight's game at Stamford Bridge... pic.twitter.com/fyF6KX4pLr

Chelsea defender Antonio Rudiger admitted his side used that perceived act of disrespect as motivation in the midweek league encounter, the Blues coming out on top 2-1 to keep their top-four hopes in their own hands.

The fallout from that latest meeting now continues, with the FA charging both clubs with failing to control their players.

"Chelsea FC and Leicester City FC have both been charged with a breach of FA Rule E20.1 following their Premier League fixture on Tuesday 18 May 2021," a statement from the FA read on Thursday.

"It is alleged that both clubs failed to ensure their players and/or club officials conducted themselves in an orderly fashion and/or refrained from provocative behaviour during the 93rd minute.

"Chelsea FC and Leicester City FC both have until Tuesday 25 May 2021 to provide their respective responses."

Chelsea are third in the Premier League heading into their final game of the season away at Aston Villa, one point better off than Liverpool in the final Champions League qualification spot.

Leicester are level on points with Liverpool but require a five-goal swing on the final day if they are to finish above the Reds.