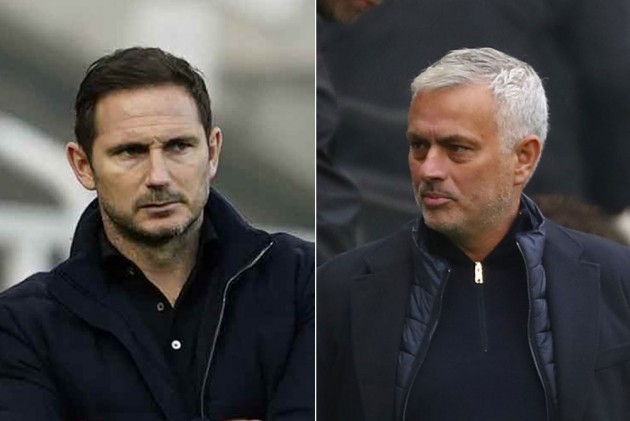 Blues legend Lampard was an integral cog in Mourinho's Chelsea machine during the Portuguese's first stint in charge at Stamford Bridge.

Playing under the Portuguese, Lampard won the Premier League and EFL Cup twice and the FA Cup once.

However, the duo had a well-publicised touchline exchange during Spurs' EFL Cup penalty shoot-out win over Chelsea back in September, while Mourinho seemed to aim a dig at Lampard when suggesting he had used a system akin to that of ex-Blues boss Antonio Conte following a 2-0 defeat of Tottenham last December.

Asked if he thought he would be spared Mourinho's usual penchant for mind games, Lampard told a news conference: "No, I'm not surprised by anything in management because we all have similar jobs to do and we all have to sit in press conferences and we all have our personalities.

"I have respect for Jose as a manager; I didn't take any offence to the Antonio Conte system [remarks] or whatever – I played it a lot differently to Conte.

"I have a lot of respect for Jose, it's not contentious for me."

Tottenham make the short trip to Stamford Bridge as Premier League leaders following an impressive 2-0 win over Manchester City last time out, but Chelsea are just two points back in third.

After beating City, Mourinho said his side were not title contenders and Lampard understands the point his opposite number on Sunday was trying to convey.

"I understand Jose's answers. That's the position we should be in, the marker has been set by Manchester City and Liverpool in the last two or three seasons," Lampard added.

"It's early on in terms of games, we shouldn't get carried away. There's such a long way to go, I understand his position.

"I think Chelsea-Tottenham is extra special anyway because of the rivalry with the teams. I played in the fixture many times.

"The fact we're in good form near the top of table adds spice - we all want to be fighting for those positions."

Some magic from @_Pedro17_ to get you in the mood for #CHETOT this weekend! #OnThisDay in 2016... pic.twitter.com/BAGUulbC8i

Some pundits were questioning whether Mourinho was still able to coach at an elite level after being sacked by Manchester United in December 2018 and enduring mixed fortunes at Spurs when replacing Mauricio Pochettino last term.

Lampard believes Mourinho was merely subject to the "reactionary" period football finds itself in.

"You don't have a record as decorated as Jose Mourinho as a manager without being a talented coach," he said.

"For us all, the game is so reactionary at the moment, form is always judged very harshly for any manager."

It was reported this week that Chelsea were in discussions already over an extended stay for veteran centre-back Thiago Silva, who has impressed since joining on a free transfer upon the expiry of his contract at Paris Saint-Germain.

Lampard said of the situation: "Yeah, I've seen reports; there's an option in Thiago's contract. The way he's playing we're very happy, that's the end of it. I'm surprised it's come out that way."

Chelsea are set to be boosted by the return of Christian Pulisic against Tottenham, but Lampard is unsure whether the winger can start following his recent hamstring issue.

"Yeah, he's fit. Ready to start is a question mark," he said. "It's hard to gauge match fitness, training in times as they are with COVID, it's hard to recreate game situations.

"Players are playing every two or three days. It's harder to get them ready for games."