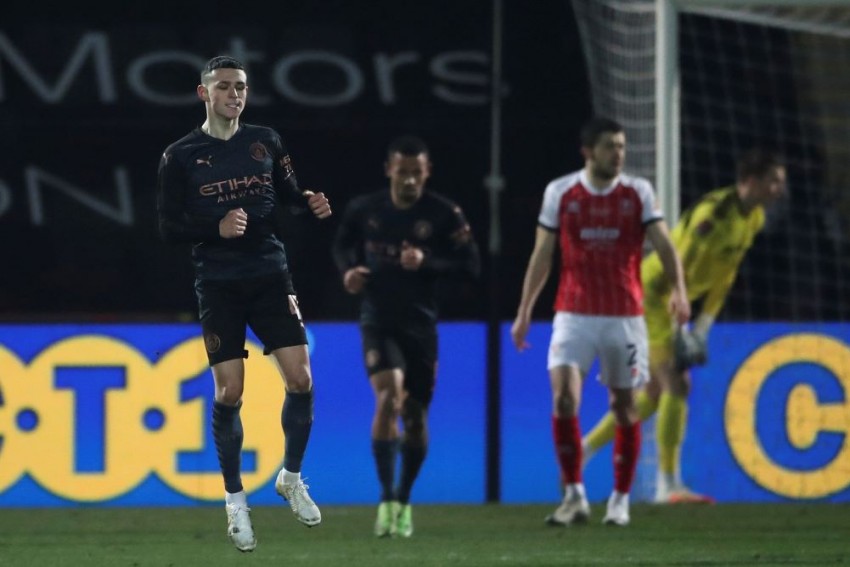 Manchester City's Phil Foden celebrates after scoring his sides 1st goal of the game during the English FA Cup fourth round match against Cheltenham Town at the Jonny-Rocks stadium in Cheltenham, England on Saturday.
Nick Potts /Pool via AP
Omnisport 2021-01-24T08:35:19+05:30 Cheltenham Town 1-3 Manchester City: League Two Side Pipped At The Last As Guardiola's Men Survive 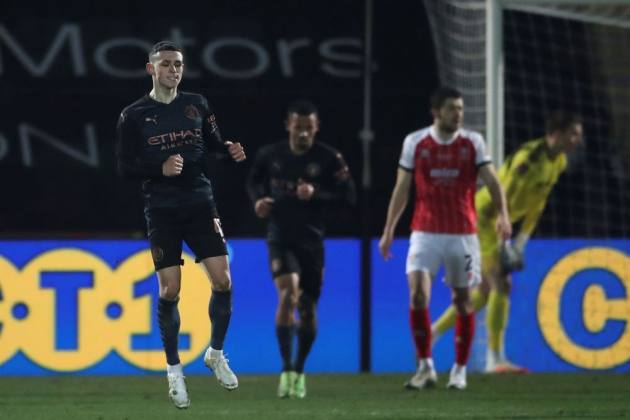 Manchester City produced a late turnaround to avoid humiliation at the hands of League Two side Cheltenham Town and claim a 3-1 win in the FA Cup fourth round. (More Football News)

Given the crowded fixture list all Premier League clubs are having to cope with amid the coronavirus pandemic, Pep Guardiola understandably shuffled his pack for the trip to Gloucestershire.

A youthful City side looked set to pay the price for profligacy after Alfie May gave the fourth-tier side a 59th-minute lead.

Ferran Torres then tapped in a last-gasp third as City overcame a tricky hurdle to keep their quadruple hopes alive.

180 - There were exactly 180 seconds between Phil Foden equalising, and Gabriel Jesus giving Manchester City the lead against Cheltenham. Dart. #CHEMCI

A City side featuring 10 changes almost had the lead 22 seconds in when Jesus latched on to an excellent ball from Riyad Mahrez, his lofted strike forcing Joshua Griffiths into an early save.

Cheltenham were positive and showed no fear in going forward, but they required heroics from captain Ben Tozer to preserve parity, the skipper's outstanding header on the line keeping out Benjamin Mendy's drive.

Griffiths' smart low save denied Torres and, though City were not quite able to produce fireworks on the pitch, some pyrotechnics within the vicinity of the Jonny-Rocks Stadium forced a delay towards the end of the first half, leading to six minutes of stoppage time.

Jesus saw another chance go begging in the 53rd minute when he clipped the post from Foden's throughball and six minutes later City were punished as Tozer's long throw into the box found its way through a crowd and into the path of May to prod home.

Mahrez could only shoot straight at Griffiths following another excellent pass from Foden, who took it upon himself to erase the deficit when he turned home substitute Joao Cancelo's cross at the far post.

And Cheltenham were unable to cling on for extra time as Jesus atoned for his previous wastefulness, firing home on the turn from Fernandinho's pinpoint pass into the box.

With home hearts broken, Torres applied late gloss to the scoreline with a simple finish from Ilkay Gundogan's pull-back.

@ManCity book their place in the #EmiratesFACup fifth round

What does it mean? - City find their shooting boots late on

City were not at the races for large periods of an absorbing contest, but would have been out of sight in the first half if not for a combination of disappointing play in front of goal and the excellence of Tozer.

That meant it required a more dramatic finish than Guardiola will have wanted but, in the end, City found their shooting boots when it mattered and can afford to dream of a four-trophy season.

Foden was the creator in chief for City and, had his team-mates been more clinical, his five key passes would have included an assist. He showed the way with his 81st-minute effort and now has nine goals in all competitions this season.

Teenage centre-back Taylor Harwood-Bellis was deployed at right-back by Guardiola and in truth he looked out of place.

His passing accuracy of 78.9 per cent was third-worst of the team's starters and he conceded possession 12 times, failing to make a tackle or interception before being substituted for Ruben Dias in the 68th minute.

Key Opta Stats: Ten in a row for City

- City have won 10 consecutive games in all competitions for the first time since a run of 11 between August-October 2017.
- Cheltenham have lost all nine of their competitive meetings with Premier League sides by an aggregate score of 23-6.
- The May opener for Cheltenham was the first goal Manchester City had conceded in 509 minutes of action in all competitions, since Callum Hudson-Odoi netted for Chelsea at the start of the month.
- Foden is the top scorer for City in all competitions this season with nine goals in 25 appearances, one more than he netted in 38 games last season (eight).
- Jesus has been involved in 12 goals in 13 FA Cup appearances for Manchester City, scoring eight and assisting four.

It is a tale of contrasts with Cheltenham hosting Oldham Athletic on Tuesday, when City visit West Brom in the Premier League at The Hawthorns.