Chennai Test, Lunch Report: James Anderson Leaves India On The Brink As England Move In For The Kill

Anderson was brilliant with his three-wicket burst in seven overs, including four maidens and costing a mere 8 runs. Jack Leach (2/56) and Dom Bess (1/50) also enjoyed some success. 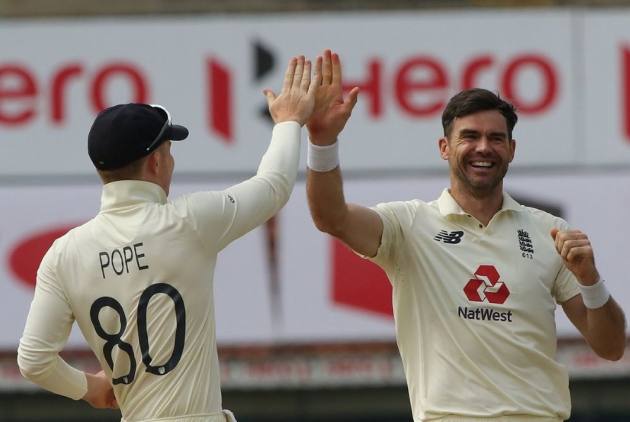 Veteran pacer James Anderson bowled England into a winning position, scalping three wickets including two in an over, as India slumped to 144 for 6 at lunch in pursuit of 420 on the final day of the first Test here on Tuesday. Day 5 Blog | Live Scorecard | News

India captain Virat Kohli (45 off 51 balls, 5 fours) and Ravichandran Ashwin (2), who copped a few blows on his body and one on the helmet, were at the crease at the interval, still needing 276 for a world record victory.

Kohli was the lone hope left for India after Shubman Gill (50) had batted beautifully but was sent back by Anderson just when he looked set for a big one.

Anderson was brilliant with his three-wicket burst in seven overs, including four maidens and costing a mere 8 runs. Jack Leach (2/56) and Dom Bess (1/50) also enjoyed some success.

The 38-year-old Anderson showed why he is considered a master of reverse swing, cleaning up Gill (50) and Ajinkya Rahane (0) in the same over with deliveries that came in sharply.

On both occasions, the off-stump was sent cart-wheeling as Gill and Rahane were left clueless.

He later dismissed the dangerous Rishabh Pant (11), having him caught by skipper Joe Root at short cover after the Indian attempted a clip to the on-side resulting in a leading edge.

Left-arm spinner Leach struck the first blow of the day, getting the reliable Cheteshwar Pujara (15) with a delivery that turned and bounced. It caught the bat and flew to slips where Ben Stokes took a good catch.

Gill, who looked to be positive in the face of the massive target, hit some beautiful shots off Bess, which included stepping down the track and clouting him for a big six mid-on.

He reached his third Test fifty but could not carry on longer as Anderson got him with a beauty.

England made a mammoth 578 in the first innings and restricted India to 337 before being bowled out for 178 to leave the hosts a victory target of 420.