Despite a poor display in Saturday's loss to Everton, Frank Lampard will stick with his preferred system for Chelsea's trip to Wolves 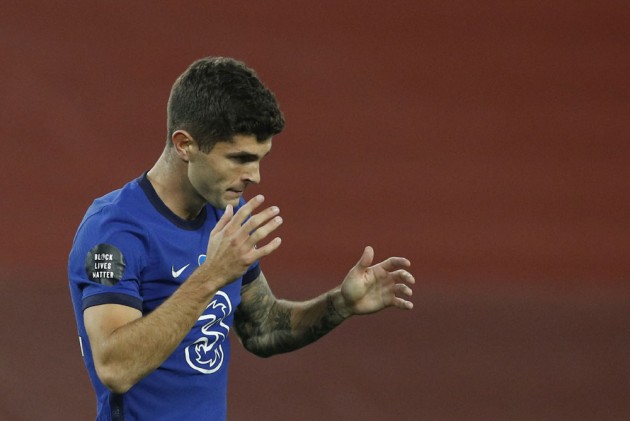 Chelsea boss Frank Lampard intends to stick with his favoured 4-3-3 formation against Wolves despite potentially being without three wingers. (More Football News)

Lampard has used that system throughout the campaign and the Blues were unbeaten in 14 games prior to Saturday's 1-0 Premier League loss at Everton.

Chelsea were without Hakim Ziyech, Callum Hudson-Odoi and Christian Pulisic at Goodison Park, so Timo Werner and Kai Havertz started out wide and had little impact on the game.

Ziyech and Hudson-Odoi will play no part in Tuesday's trip to Wolves, while Pulisic is included in the squad but not over a hamstring issue, though Lampard will not change his formation.

"That is not something we will do in the short term, no. We've been playing really well," he said at Monday's pre-match news conference.

"Hakim has certainly been very pivotal and Callum when he's been playing has done well and all of a sudden we are very short on wingers. But we have capabilities to still play.

It's tense at the top... #PL pic.twitter.com/IEcJUJ8CMI

"It wasn't the formation that we didn't get right at the weekend, it was the way we executed it, which we have players that can definitely comfortably do that. So we just need to improve on the weekend."

Asked if Pulisic has a chance of playing, Lampard said: "He trained on the day we played against Everton and he felt better so he is in the squad for tomorrow.

"It is yet to be decided whether he starts or not but it is positive news from where it was at the weekend."

Chelsea had 72 per cent of the ball against Everton but failed to register a shot on target in the second half, their last effort coming from defender Kurt Zouma after 28 minutes.

Lampard conceded after the game his side did not have the answers to break down their opponents, not helped by the absence of Ziyech.

Chelsea have won four and drawn one of the five league games Ziyech has started this season for a win rate of 80 per cent, compared to 28.6 per cent - two wins, three draws, two losses - in the seven games he has not started.

But Lampard insisted he has other players in his squad capable of stepping up to fill the void of the Morocco international, who is expected to return from a thigh injury in the next fortnight.

"The Premier League is unforgiving," he said. "We saw that with different results over the weekend and we see it pretty much every weekend and matchday.

"We weren't at our top level on Saturday and we got beaten. That's it. We've been on a long unbeaten run, playing some really good football as well as winning games.

"We dropped our level for a game. That's absolutely on us to pick it up again straight away."

He added: "What we have to come to terms with, it felt like Everton played very similar to how Tottenham played against us a couple of weeks ago and if people are watching us of course they will to stop us from doing what we've been doing well.

"It's on us to find other ways. We didn't move the ball quickly enough as a team to hit the sides to maybe turn them around.

"So I think we just need to understand that when teams make it difficult for us, we have to have ways to get round that. Our level dropped.

"If we'd been at our top level we would have found a way to get round that. I certainly accept this group of players going so long unbeaten that there is one game that feels like that.

"And we can't really make any excuse of not having the wingers. It is unfortunate in the short term. I think we have players capable of playing in those areas so I don't want to hang on that one. Hopefully the wingers are all back soon anyway."

Chelsea were paired with Atletico Madrid in Monday's Champions League last-16 draw and Lampard acknowledged his side have a huge task on their hands if they are to progress.

"Most people will say it's the toughest draw we could have had when you go off current form, how they are doing in LaLiga, European experience and the quality of the team and players

"I watched them knock Liverpool out last year. They are obviously a great team with experience and quality in the squad. Most people would say that they were one of the toughest we could have drawn on paper. We have to turn up and do our job."