Class Of 83! When Kapil Dev’s ‘Davids’ Slayed The Goliaths Of World Cricket To Make India Believe 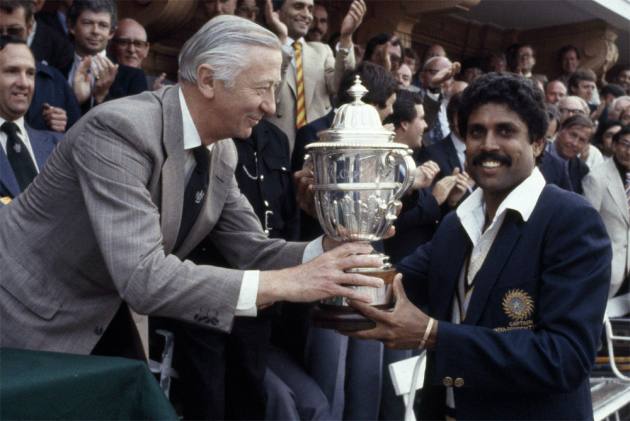 Thirty-eight years after they won the 1983 World Cup final, ‘Kapil’s Devils’ are finally on celluloid, as India wait for a cinematic recounting of that incredible story on Christmas Eve, 2021. That unforgettable evening, as Mohinder Amarnath trapped Michael Holding plumb in front with one of his deceptive ‘dibbly dobblies' that the West Indians, used to their own “pace like fire,” found so baffling, a nation held its breath at the enormity of the achievement -- and a generation started to believe. (More Cricket News)

Man of the Match in that never-to-be-forgotten final, Amarnath jogged across unhurriedly to pick up a stump as a personal souvenir, as crowds of Indian fans swarmed across the hallowed turf at Lord’s, much as the West Indian fans had done in the two previous cricket World Cups, in 1975 and 1979.

On that day, however, they could only look on in stunned disbelief. India, the rank outsiders at 100 to 1, had just done the unthinkable, defeating the West Indies, the odds-on favourites, considered invincible at the time. And David Frith, Editor of the Wisden Cricket Monthly, who had vowed to “eat his words if India won”, was seen manfully gulping down pages of his publication, up in the Press Box, washing them down with a glass of wine!

The Davids of the cricketing world had just laid low the mighty Goliaths.

And India, the team that had won just two matches against East Africa and Sri Lanka in the two previous World Cups, were suddenly the new world champions, having humbled the mighty West Indies, boasting of one of the greatest line-ups of all time.

Viv Richards, Gordon Greenidge, Desmond Haynes, skipper Clive Lloyd, Jeff Dujon and the pace battery of Andy Roberts, Holding, Joel Garner and Malcolm Marshal – were each at the height of their respective dazzling powers. That West Indies would lift their third successive World Cup Trophy had seemed a foregone conclusion.

Yet on that day, India beat them for a second time in that World Cup, successfully defending a modest total of 183 that looked way below par, but turned out to be an insurmountable mountain in the end as West Indies crumbled for a paltry 140.

And the world of cricket would never be the same again, as India’s journey to becoming a modern-day powerhouse in every sense, really began on that momentous day.

This was a different, pre-liberalisation India. A quieter, pre-television (in most places), pre-internet, pre-mobile telephone India, with infinitely fewer options and choices in every aspect of life. An India where the majority of the country followed that unbelievable win on their radios and transistors. And corporate sponsorships were still not on the horizon.

Looking at old videos of those matches now, what immediately stands out, is the muted, or in many cases, the complete absence of, ‘signature' celebrations and theatrical high fives at the fall of a wicket, so common today. A quiet pat on the back for the bowler was about all that there was to it.

No one would dare to accuse those teams of not being combative, or aggressive enough and yet, their on-field conduct conformed to the restraint and reticence of that ‘earlier time’, so different from now.

India went wild and a billion people believed for the first time that they could be world beaters and not just ‘also-rans.’ Believed that they had the right to ask for more of themselves and of the world they lived in. And the community of cricketing nations looked on with a grudging, new-found respect.

That was the legacy of the 1983 World Cup, in the history of our nation. It emphatically announced India’s arrival on the world stage. No other World Cup win can ever be the same again simply because this was so much more than just a victory in a sporting contest.

The film 83 will doubtless, relive some of the iconic moments and images from that game for us, starting with Balwinder Singh Sandhu, an unlikely hero, who set the tone of the triumph, bringing one back into Gordon Greenidge, as he misread the in-swinger and shouldered arms.

And just when the great Viv Richards seemed to be disdainfully taking the match away from India in his customary, imperious fashion, he mistimed a pull off Madan Lal and Kapil Dev ran backwards a long way as the ball climbed into the skies, before dropping into his safe hands.

Half a globe away, a nation glued to its transistors, heaved a collective sigh of relief. And Sunil Gavaskar, not at his best with the bat that day, chipped in with two crucial slip catches, worth their weight in gold. Those images remain indelibly etched on the collective consciousness of a generation that followed the match with bated breath.

Looking back, was the victory quite so unexpected, as the movie trailer would have us believe?  We had a very good Test team then that had just gone through a baptism of fire, against some of the fastest bowlers of the time on their home turf in the West Indies. Battered and bruised, they stood their ground with tremendous courage and chased down a target of 403 at Port of Spain in the highest-ever successful fourth innings run chase of the time.

That kind of mental toughness and grace under fire brings teams together, closer perhaps than an Indian team had ever been before. And that spirit carried on into the World Cup, as we beat the West Indies in the first pool game, in a massive upset. A victory was set up by a wonderful 89 by the late Yashpal Sharma, as we gave Windies a target of 263 and bowled them out for 228. That loss which not many remember today, was the first time the West Indies had lost a World Cup match.

That unexpected win further enhanced a burgeoning self-belief that was quietly building up, unnoticed.  And then came that incredible turnaround at Tunbridge Wells, from the depths of 17 for 5, as Kapil Dev went berserk in one of the most iconic World Cup knocks of all time.

That was the point from which things started to fall in place...and Kapil’s Devils started to win the World Cup in a fairy tale to beat all fairy tales.

Today the ‘Devils’ have all moved on in life, become senior citizens and grandfathers. Kapil has suffered a heart-attack and survived. Yashpal Sharma the hero of that first game against the West Indies, was not so lucky.

They will always hold a very special place in our hearts and in the nation’s history, for like Tenzing Norgay and Edmund Hillary 30 years earlier, they had climbed the Mount Everest of cricket and laid the pathways that others would follow in later years.

And the film 83, that casts Ranveer Singh as Kapil Dev, has the unenviable task of bringing that hugely emotional legacy to life on the silver screen, for a new generation of Indians, unfamiliar with that time and its heroes.

(The author is a retired Wing Commander of the Indian Air Force and played Ranji Trophy for the Services. View are personal)