FIFA Club World Cup: Sextuple Takes Bayern Munich To The Top Of The Mountain, But Where Do They Go Now?

Bayern Munich scraped past Tigres UANL to complete a sensational sextuple, but might their momentum be waning after 12 months of winning? 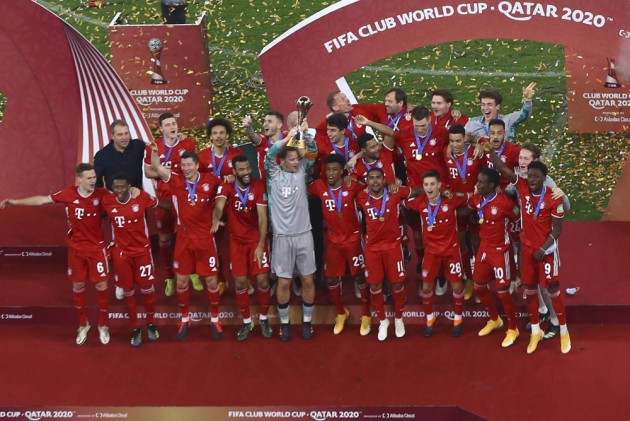 For 12 months, Bayern Munich have won and won again.

This time a year ago, Bayern were just a point clear at the top of the Bundesliga with the knockout stages of the Champions League still to negotiate.

But an outstanding, record-breaking 23-match winning run – the longest by a German club since the formation of the Bundesliga – took in four titles: the league, the DFB-Pokal, a sixth European crown and the UEFA Super Cup.

Since the conclusion of that remarkable stretch, which started on February 16 and ended with defeat on September 27, Bayern have added the DFL-Supercup, three days after the Hoffenheim loss, and now, with victory over Tigres UANL on Thursday, the FIFA Club World Cup.

Hansi Flick's side have bettered the efforts of their class of 2013, who won a meagre five trophies, losing Pep Guardiola's first game in charge to Borussia Dortmund in the domestic Supercup.

Champions of Germany, of Europe and on top of the world, the challenge now is to stay there.

David Alaba would appear set to leave and there is uncertainty, too, surrounding Flick, while the team have not evolved on the pitch.

It has been easy, of course, for Flick to set his side out to do the same again, having swept past Tottenham, Chelsea, Barcelona and Lyon before edging Paris Saint-Germain in last season's Champions League.

They lost Thiago Alcantara and signed Leroy Sane, who started and struck the crossbar with the best effort of the first half on Thursday – Joshua Kimmich's disallowed goal aside – but Bayern might well have shown only one change from the win against PSG if not for Leon Goretzka's recent coronavirus battle, Thomas Muller's positive test and Jerome Boateng's grave personal matters.

Even then, Benjamin Pavard, only absent due to injury last term, would have replaced Thiago, with Kimmich now back in midfield.

Bayern are attempting to repeat last season; they have three trophies to their name, boast a seven-point advantage in the Bundesliga and are through in Europe, but the swagger is not quite there at this stage.

Falling short of the level of dominance in 2019-20, Bayern are averaging 16.8 shots per match, 6.7 shots on target, 615.8 passes and 62.2 per cent of the possession – across the board the lowest marks since Guardiola arrived in Bavaria.

Continuing at the helm, unlike Jupp Heynckes after Bayern's previous Champions League triumph, Flick has not followed Guardiola in boldly transforming the team.

This time, Sane was supposed to take Bayern to another level but has struggled to build on a fine debut against former club Schalke. Alaba's exit would rob them of a more valuable asset.

And given the swashbuckling style of last season's success, even with their trophy haul still growing, anything other than a serious tilt at the Champions League would surely be considered a failure. The bounce of a ball in one of sport's most unpredictable competitions could well dictate the mood music in Munich.

Bayern were value for their victory on Thursday, even if it ultimately relied on a scruffy Pavard strike, and have enjoyed a truly historic year.

However, if they are to prolong their peak and make this more than a 12-month merriment, they might need to again show a little more. Another 23-match winning run ought to ease any concerns.